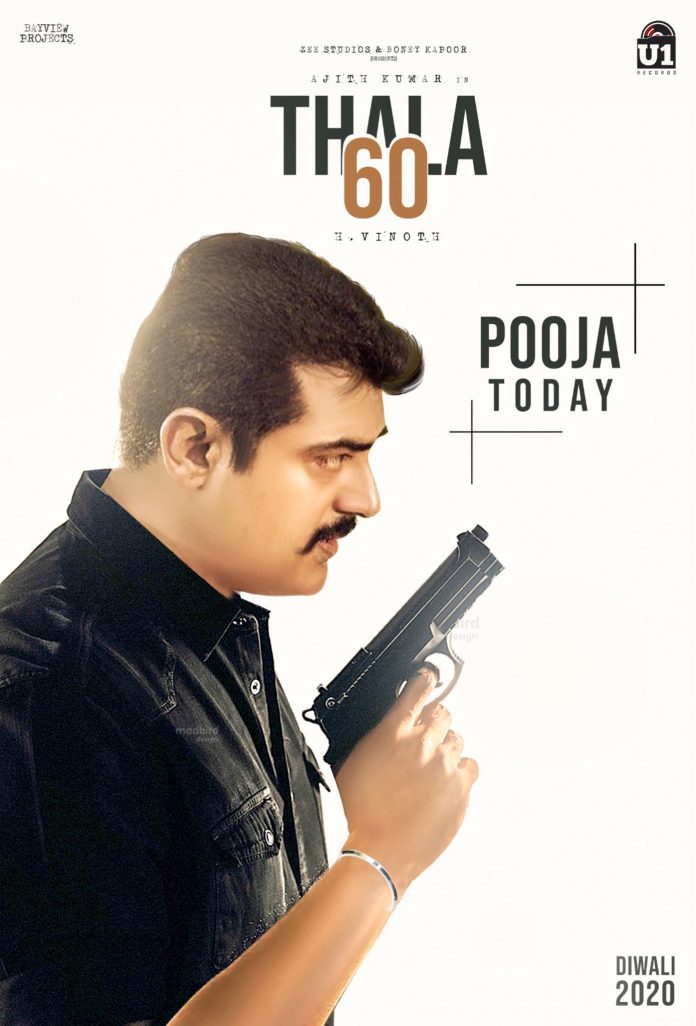 After the success of the Kollywood film Nerkonda Paarvai, director Vinoth is back with film Thala 60 with official pooja today Friday 18th October, 2019. Thala Ajith Kumar will be doing the lead role and opposite cast has not been finalised till yet. #THALA60PoojaDay is trending worldwide today with more than 100k tweets.

Keerthi Suresh and Nayanthara are the actresses’ names which are coming ahead for the opposite cast but no official announcement has been made. It was first reported that Nayanthara was acting in the film. It was also reported that Keerthi Suresh will be working with Ajith for the first time and she went to Bonnie Kapoor’s office to negotiate.

The film is produced by Boney Kapoor is said to be kickstart is the second venture for the director, actor and producer trio after Nerkonda Parvai. Bonnie Kapoor’s daughter Jhanvi will be playing an important role. In this film, Ajith is acting as a police officer. At the same time, it is revealed that there will be more bike race and car race scenes in the film. Anika is also reportedly playing the daughter of Ajith in the film.

Prior to that, both Ajith and Anika had played Dad’s daughter in the films Know Me and Viswasam. With this, many tweets are spreading the word on Twitter that they are going to Thala 60 mahurat pooja today.
(Also Read Thala 60 movie title leaked)
In addition, the pooja will be held at Bony Kapoor’s residence in Mylapore at 10 am. Ajith is expected to attend. Recently Ajith was seen with a different look at Chennai Airport while he was going for National level Rifle shooting competition held in Delhi. Nayanthara is in the picture with Vijay. Following this, she is having trouble with some of the films. The film is expected to be shot in locations like Budapest, South Africa, and the Middle East.

There are back to back projects for Ajith Kumar, after Thala 60 the actor will be working with Vinoth H for the film Valimai. The movie is expected to release on April 20, 2020.