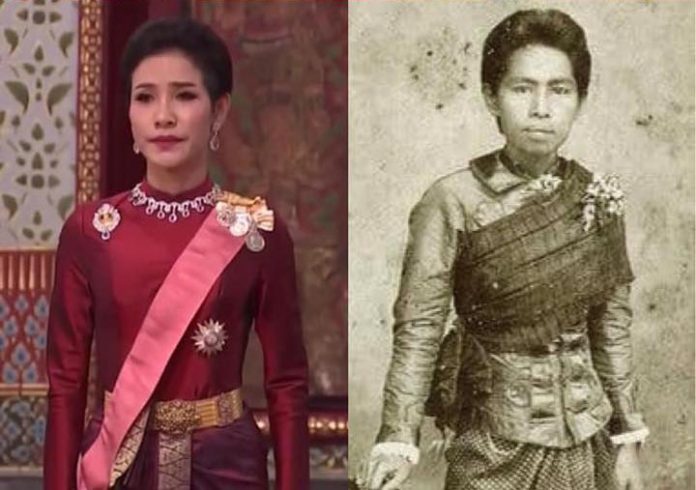 The official royal consort of Thailand’s King Maha Vajiralongkorn has been stripped of her title, according to a Royal Gazette statement.

The title, ranking and all medals have been removed from Sineenat Bilaskalayani for inappropriate behavior and a failure to be loyal to the monarch, according to the statement released Monday night in Bangkok. She was appointed in July, just two months after the king’s marriage to Queen Suthida, his fourth wife.

An official announcement said Sineenat Wongvajirapakdi was “ambitious” and had tried to “elevate herself to the same state as the queen”. Sineenat, 34, was the first person to hold the title of Royal Noble Consort in almost a century. Vajiralongkorn designated her as such in July, three months after he announced his fourth wife Suthida Bajrasudhabimalalakshana as the queen.

Sineenat, who was a major-general and is a trained pilot, nurse and bodyguard, was the first person to be awarded the title of Royal Noble Consort in nearly a century.

According to the announcement, Sineenat not only “expressed her opposition and exerted her pressure in every possible way” regarding Queen Suthida’s elevation to the throne as the Queen of Thailand, she also sought to have His Majesty the King appoint her to the role instead.

After her repeated disobedience and attempts of interference with the royal affairs, the statement said, His Majesty the King graciously bestowed her the title of Royal Noble Consort in July out of hope that Sineenat would “lessen her pressure” and change her tact.

In August, the palace released unprecedented pictures and a biography of Sineenat, which provided a rare insight into royal life. Images of her posing with the monarch were among the dozens released.

Queen Suthida – a 41-year-old former flight attendant and deputy head of his bodyguard unit – is King Vajiralongkorn’s long-term partner and has been seen with him in public for many years.

“Her actions are considered disloyal, ungrateful, and ungracious of His Majesty’s kindness,” part of the order reads. “They caused division among the royal servants and misunderstanding among the public; these amount to acts of sabotage against the country and the institution [monarchy].”

She was subsequently stripped of all royal ranks, decorations, and military titles; Sineenat previously held an army rank of major-general.