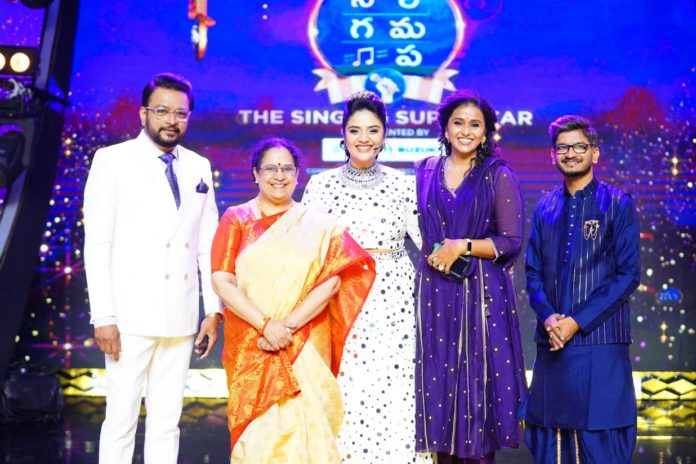 Over the last 16 years, Zee Telugu has always aimed at providing its viewers with cutting-edge and entertaining content. The channel has presented several enthralling fiction shows and clutter-breaking reality shows. Adding to its list of unique and entertaining recent launches, the channel is all set to bring back the most loved singing reality show of the Telugu television industry in a brand-new avatar – ‘Sa Re Ga Ma Pa – The Singing Superstar’. The new season promises to discover and nurture the most talented singers of the Telugu-speaking states. However, this time around, the show will be grander and more exciting than ever! After premiering on 20th February at 6 pm, ‘Sa Re Ga Ma Pa – The Singing Superstar,’ will air every Sunday at 9:00 PM from 27th February on Zee Telugu.

The iconic singing reality show has provided several extraordinary singers a platform to showcase their talent and learn from the best in the industry since its inception. This year once again, the contestants will get a chance to train under top mentors like Geetha Madhuri, Revanth, Saketh Komundari, and Sri Krishna while singing on a grander stage. The renowned panel of judges, including musical icons like Koti, S P Shailaja, Smitha, and Ananta Sriram, will also be seen evaluating every singer’s performance and progress throughout the season and helping them turn into Singing Superstars.Sreemukhi, on the other hand, will be seen as the host, who’ll ensure that viewers are entertained and engaged throughout each episode. If the top celebrity names have got you excited, wait till you watch the grand premiere of Sa Re Ga Ma Pa – The Singing Superstar which is all set to air on 20th February from 6 pm onwards.

The Mega Launch episode will not only give viewers a wonderful glimpse of the talented singers of ‘Sa Re Ga Ma Pa – The Singing Superstar’ and their performances, but it will also present to everyone their inspirational stories. Apart from the mentors, judges, and contestants, top celebrities like Pooja Hegde, Sumanth, and Varshini will also be seen as special guests during the grand premiere, and they will truly make the episode a must watch! In fact, each contestant will try to impress Pooja Hegde during the premiere episode by singing enchanting songs for her. Judge Koti will also be seen gifting her a guitar. The channel has started revealing the contestants from Sunday, and Dasari Parvathi from Kurnool, Daniel from East Godavari, and Vinod from Kadapa had won the ardent musical fans’ hearts along with the judges and mentors. All in all, the grand premiere episode, and the new season of ‘Sa Re Ga Ma Pa – The Singing Superstar’ is undoubtedly going to keep you at the edge of your seats!

Talking about the launch of the show, Chief Content Officer – Telugu, Anuradha Gudur shares, “Sa Re Ga Ma Pa is much more than just a music reality show; it’s a legacy that continues to rule the hearts of millions of people in the Telugu speaking states. We are elated to present the new season of the singing reality show in a brand-new avatar. We hope that the contestants, with their unique voices and touching stories, will inspire and entertain viewers across the Telugu states as they unite in choosing the Telugu Singing Superstar.”

Koti, who will be seen as a judge of the popular reality show once again, also adds, “Sa Re Ga Ma Pa has been very close to my heart because I have been associated with it from the very first season. I feel emotional and proud that the 14th season of the show is being launched. It has been around for so long because everyone loves it. No singing-reality show celebrates music like Sa Re Ga Ma Pa, and I’m confident that this season will raise the bar higher.”

S P Shailaja, who is making a return to the show as a judge, also mentions, “It feels great to come back to Sa Re Ga Ma Pa once again. The show has been the Telugu TV industry’s favorite singing reality show for so long, and I feel a superlative variety of talent comes to showcase their singing skills on this platform. Demanding nothing but the best, I will always encourage the contestants of the show and push them to grow and become the Singing Superstars that they deserve to be!”

Adding to everyone’s excitement, Judge Smitha revealed, “Music has been my way of life since my childhood, and I’m honored to be able to share my experience with the budding singers coming on the show. This season will truly be epic, with much importance being given to quality, and taking singing and the production value of the show to the next level. The heartwarming stories of the contestants will also inspire many people across the country.”

Adding his own flavor to the show, Judge Ananta Sriram said, “Sa Re Ga Ma Pa has been the ultimate platform that has changed the lives of many contestants over the past few years and giving the music industry several gems. With the new season as well, we plan to discover and nurture young talents from Andhra Pradesh and Telangana and enable them to be the Singing Superstars of the future.

So, what are you waiting for, get ready to watch the most loved singing reality show on Telugu Television with Sa Re Ga Ma Pa – The Singing Superstar beginning from 20th February at 6 pm and airing every Sunday at 9:00 PM from 27th February, only on Zee Telugu!