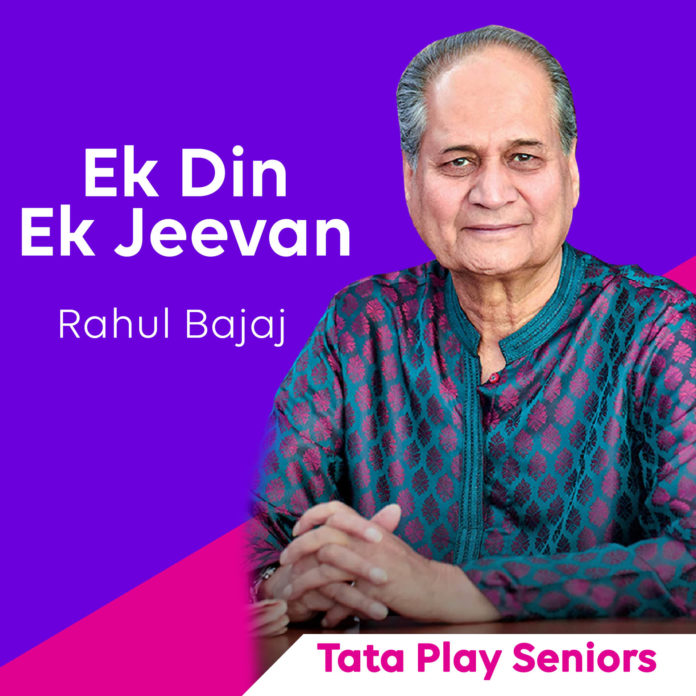 The fearless Indian billionaire businessman who has been known to set new precedence and is an everlasting name in the automobile industry – Mr Rahul Bajaj, passed away in Pune on February 12, creating a case study that laid the foundation of India’s middle-class story on two wheels. Under his leadership, Bajaj turned into more than a household name with a proud, emotional note of new emerging India. Tata Play, the premium destination for nuanced entertainment, is set to pay a special homage to Rahul Bajaj by telecasting his of yore achievements and leadership skills. Through its divergent value-added service, Tata Play Seniors TV, it is all set to telecast ‘Ek Din Ek Jeevan’ on February 19, 6:30 PM on channel #505

The show is hosted by Indian columnist and political reporter Tavleen Singh who interacted with Mr. Bajaj for this exceptional series. The episode unfolds many overt and coveted aspects of his glorious life, where Mr. Bajaj is seen answering controversial questions with much ease and fervor. His innate sense of calling a spade a spade can be seen very beautifully through his straightforward replies where he lives up to the fearless tag conferred on him by his close friends and industry stalwarts. The episode will also unveil his not so known early struggles of life that made him take some courageous decisions, shaped his spiritual life, and form a strong foundation both on the personal and professional fronts.

Mr Rahul Bajaj has been the sole reason for domestically producing two-wheelers and making every common man’s go-to for his everyday needs. He indeed became India’s touchstone middle-class fantasy. The unforgettable ‘Hamara Bajaj’ campaign encapsulated that triumphant spirit that made – Rahul Bajaj synonymous with ‘Hamara Bajaj’ for the people of India. The show will take the audience on a nostalgic trip down memory lane of a day in Rahul Bajaj’s life.