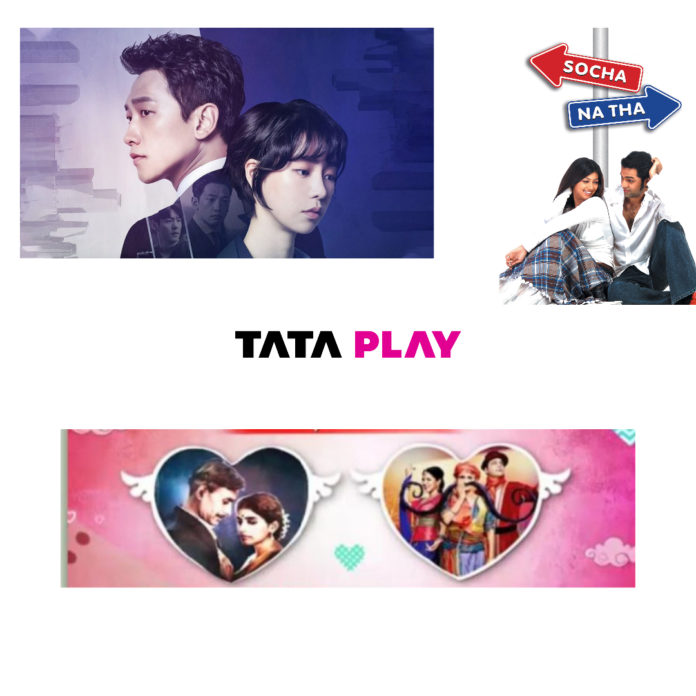 It’s that time of the year when romance is in the air. Romantic movies and shows constantly have you feeling all the right emotions, whether you have someone to watch with or are living vicariously through the film or a series. Marking Valentine’s week, Tata Play is set to bring the celebration of the emotion that needs no language to your screen with a unique line-up curation. Through its divergent value-added services such as Tata Play Romance, Tata Play Videshi Kahaniyan and Tata Play Theatre, Tata Play will host iconic love stories for its viewers to bring alive the most romantic day of the year.

Imtiaz Ali is known as the love guru of Hindi cinema, and his association with a project brings a certain amount of credibility to the film. With his debut film Socha Na Tha, Imtiaz Ali gave us a glimpse into the world of love that makes you want to fall in love. Though we have all seen this slice of life movie, we dare you to change the channel if you stumble upon this again. The film features the confused couple Abhay Deol and Ayesha Takia and showcases the hotchpotch they create while trying to be rebels and finding resonance with their inner voice that lurks for each other. Socha Na Tha also marks Imtiaz’s debut into the direction world, and rest, as they say, is history!

How about some K-drama to spice up your life and keep up with the trend. Another one on the Valentine Watch list by Tata Play is Welcome 2 Life on their Tata Play Videshi Kahaniyan service. ‘Welcome 2 Life’ puts a perspective on the consequences of important decisions made in life and utilizes second chances. This Korean drama screens storylines of two parallel worlds that are similar yet different. The story includes romance, suspense, humor, and supernatural forces at work. With the combination of action and adventure, the show has a well-rounded appeal.

Why only restrict yourself and your partner to movies and series, this Valentine, indulge in some raw performances through Tata Play Theatre. Rahenge Sadaa Gardish Mein Taare is a Hindi play starring super talented Sonali Kulkarni and Arif Zakaria. A story with a touch of love, romance and loss of love will keep you glued to the screen with its enthralling storyline. The drama is based on the relationship between two creative people and their professional lives. A tribute to 1950s Hindi cinema, it is heavily inspired by the life of filmmaker Guru Dutt, his singer-wife Geeta Dutt and their tumultuous marriage.’Piya Behrupiya’ at 8 PM on 14th February (Tata Play Theatre) Channel #315 and 316

They say once an animal tastes blood, there is no looking for them, and we can say the same thing for viewers who have once tasted the elegance of theatre. An adaptation of William Shakespeare’s famous comedy play, ‘Twelfth Night’, ‘Piya Behrupiya’ is a delightful musical adapted by Amitosh Nagpal and directed by Atul Kumar. The story combines cruelty with high comedy and the pangs of unrequited love with some of the subtlest poetry and most beautiful songs Shakespeare ever wrote, which will make you a couch potato. The drama stars Gagandeep Singh Riar, Mantra, Saurabh Nayyar, Aadar Malik, Amitosh Nagpal, Neha Saraf, Geetanjali Kulkarni, Manasi Multani, Trupti Khamkar and Titas Dutta