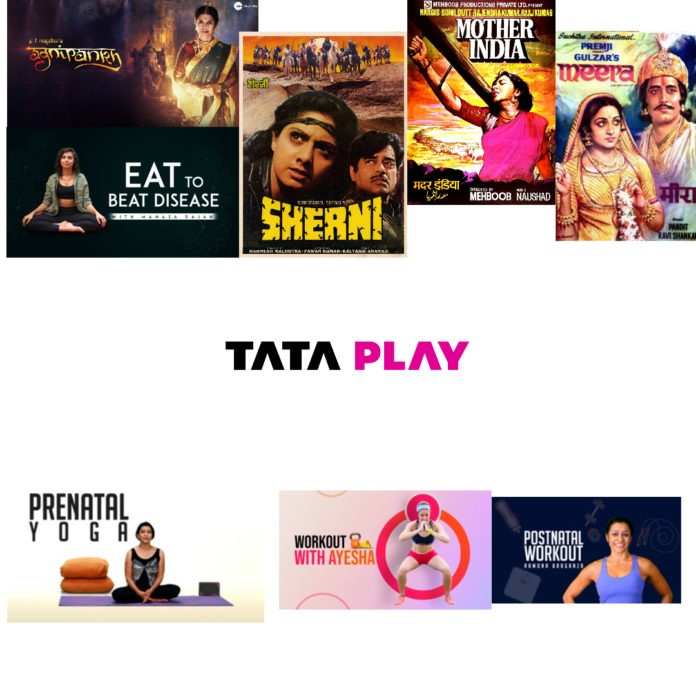 They say women are superheroes without capes, and we would not contest that. On Women’s Day, Tata Play celebrates the fearless, self-starters, risk-takers, kickass and empathetic women in you and our lives. Through its divergent value-added services such as Tata Play Theatre, Tata Play Classic Cinema, and Tata Play Fitness, Tata Play will host some iconic play, movies and fitness segments for its viewers that speak of the tenacity of the women. This specially curated and hand-picked list of binge-worthy content highlights the best of women empowerment and might.

This masterpiece play portrays the perseverance and determination of women and what she can achieve and change if she sets her heart and head out to something. The teleplay is set against the oppressive Zamindari system of 1948, where the fiercely strong Durgeshwari played by the multitalented Mita Vashisht goes to great lengths to preserve her position in the family and the society. The play also stars stalwarts like Dinkar Gawande, Gulki Joshi, Prabhat Sharma, Satyajeet Dubey, Satyajit Sharma, Sheetal Singh, and Somesh Agarwal.

With a promise to telecast the best Tata Play classic cinema brings a mix of varied emotions to the audience. The lineup for the movies on the day includes Sherni, Mother India and Meera.

Sherni, the 1988 Sridevi starrer movie, which revolutionized the way Indian actresses were portrayed in an unconventional avatar. Forced to take on the world all by herself after witnessing the tragic death of her entire family by the powerful and influential Thakur’s and left no-where to go, Sridevi, aka the fearless Durga, plans well-deserved revenge and joins her father, who already had landed himself in a band of robbers to avenge the death of her entire family. The movie also saw some stellar performances from a talented lot of actors like Shatrughan Sinha, Ranjeet Bedi, Lalitha Pawar, Kader Khan, Tej Sapru, Sudhir etc.

The iconic film changed the face of Indian cinema and the diversity it showcases in terms of story lines and talent packed in one, it has helped set a pattern for the nearly 50 years of Indian film that has followed. A defining film in the history of Bollywood, Mehboob Khan’s ‘Mother India’ features talent powerhouse Nargis as Radha, who fights against all forms of social and personal adversity without compromising her honor to ensure she and her family see the light of day after their fair share of struggles and hardships. The movie also saw some stellar performances from Sunil Dutt, Raaj Kumar, Rajendra Kumar Tuli, Kanhaiyalal Chaturvedi, Mukri etc.

This magical biography ‘Meera’ is based on the life of a saint-poet who renounced princely comforts in pursuit of her love for Lord Krishna features Hema Malini and Vinod Khanna and is directed and produced and written by Gulzar. This movie, released back in 1979, received much appreciation and accolades and portrayed the love saga of the heavenly duo Saint Meera and Lord Krishna in the most cinematic way. Tune into Tata Play’s Classic Cinema to enjoy this masterpiece at channel #318

Tata Play Fitness, known for its differentiated workout offerings, has come up with special thought to thank and delight women for all the love, care, and warmth they spread across in the lives of all. Therefore, each workout is catered to women with tailored programming to benefit their daily lives. This 8th March, it is all set to feature content on Prenatal Yoga and Postnatal workout, Tackling Hormonal Imbalance with Mansa Rajan and a special workout with fitness trainer Ayesha Billimoria