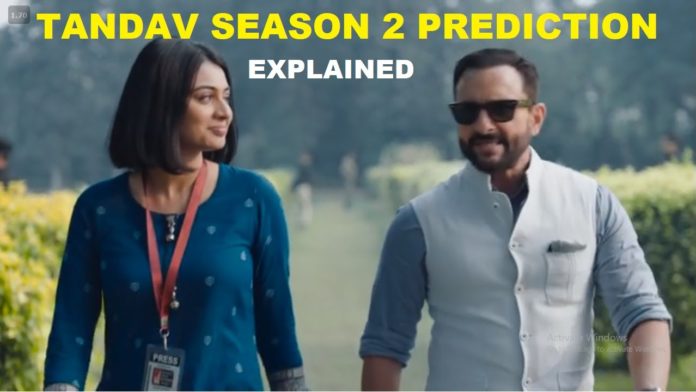 Amazon Prime Video’s biggest release of 2021, Tandav landed in trouble from its first day. Tandav released on the 15th of January amid much expectations from the star cast including Saif Ali Khan, Dimple Kapadia, Kumud Misra, Kriti Kamra, and several others. Tandav wished to be an eye-opener into the murky world of Indian politics and the quest for power.

‘Tandav’ featured resemblances to several political figures in the Indian political ecosystem. However, the plot was gripping yet fictional. It was difficult for the stellar cast, spectacular acting to keep the storyline up and running. With several expected moves, Samar Prathap Singh’s ploy to win his father’s Prime ministerial seat is entertaining.

There were specular open loops in the storyline and the ending gave way for speculations around the possibility of ‘Tandav’ Season 2. However, the audience were left wondering at certain points during the entire show. ‘Tandav’ Season 1 comprised of nine episodes.

Why Did Samar Prathap Singh Make Gopal Das Munshi as the Prime Minister?

Samar Prathap Singh destroyed the prospects of Anuradha Kishore continuing in the post of the Indian Prime Minister. However, the first season ended with an epic twist. Samar made the senior leader of the party, Gopal Das Munshi as the Prime Minister. Gopal did not expect this coming and neither did Anuradha.

There are multiple reasons for this decision. Samar was earlier quoted saying, “If you cannot be the king, be the kingmaker”. Samar’s major obstacles to reach the throne of power was Anuradha and Gopal Das Munshi. If Samar took the PM’s seat right away, Gopal Das Munshi could create a coup and destroy the party and Samar’s future.

The obvious twist could be Samar gathering the dirt around Kailash’s affair and pulling down Gopal Das Munshi in the process. However, there could be several obstacles. Gopal Das is a senior leader and he might not relent to Samar as a desperate Anuradha did.

Will Ayesha Turn Against Samar to Take the Throne?

An interesting twist towards the end of the second season could be the betrayal of Samar by Ayesha. Ayesha is seen as an equally competitive lady who is watching Samar’s moves very carefully.

Will Shiva Be a Bigger Threat to Samar Than Gopal Das?

Samar’s plot to use Shiva as the gamechanger failed in the first leg. After Shiva’s refusal to join Samar’s party, Gopal Das will face the heat from the youngster.