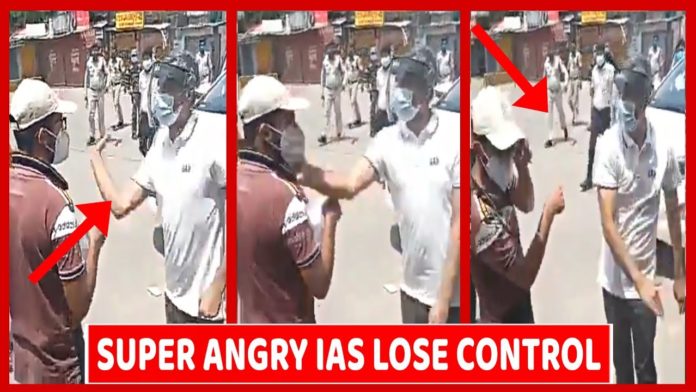 The second wave of Corona has wreaked havoc all over the country. At present, Chhattisgarh is one of the most affected states of Corona. In such a situation, the entire state has been under lockdown for a long time, and the administration is trying its best to implement it. But on Saturday, an incident came out from Surajpur in Chhattisgarh that put the administrative staff engaged in curbing the Corona infection into question.

Surajpur district collector Ranbir Sharma, using his administrative hank during the Corona lockdown, treated a citizen so that his behavior is being criticized across the country. The responsibility of implementing the Corona Lockdown in Surajpur was on his shoulders. Still, in the guise of being a collector, he lost his temper and first took a mobile of a citizen who came to the market from work and slammed it on the road. After this, he slapped and got the policeman to beat him with lathi.

But the fate of the collector was such that this whole incident was captured in mobile. In a short time, this video also became viral on social media. #SuspendRanbirSharmaIAS started trending on IAS on Twitter. In such a situation, the Chhattisgarh government also stood up. Everyone started demanding strict action against the Collector.

Will @IASassociation which is quick to come together when one of their own is threatened in any way say anything on rogues like @RanbirSharmaIAS ? Looking forward to see a statement from them.

Seeing the situation worsening, Collector Ranbir Sharma also released the video apologizing late at night. In the eyes of administrative power, the pictures and videos on the social media of the exploits went viral; then Collector started playing the Victim Card, calling for the lockdown. However, his apology was seen more in the charge sheet, in which he used to count the mistakes of the citizen and clarified that the person he beat was not a minor.

As soon as Ranbir Sharma IAS issued his apology, he once again trolled on Twitter. This time, Apology started trending with his videos. He apologized in his video and said, I am ashamed of my behavior today. I apologize to all of you. I did not intend to offend anyone. Today, the entire Chhattisgarh, including the Surajpur district, is struggling with the COVID epidemic; we all, the government staff, are working day and night to save everyone from this epidemic. My parents and I were affected by the COVID infection. My mother is still positive. The person in the video is 23 years old. I apologize to all of you again.

This isn’t an apology but an excuse for his thug like behaviour. https://t.co/Gbooxq8MVN

Apologies do not absolve an official of such gross misuse of power. Accountability is key for any administration. https://t.co/Jtq7w3JGc2

The Collector was also trolled for the second time because, in his apology, he is saying that the one he slapped is not a minor. In such a situation, people are asking him that if he is an adult too, will he take away his mobile and throw it away? Do you have the right to slap? After this, what about beating with a stick?

The Great Collector in the video is none other than Ranbir Sharma. He was caught red handed taking bribe in 2015 and transferred. Lack of strict action for such crimes has motivated him to now act like a thug and a goon. How will apology or tears help now?https://t.co/6JL8TCwjIF

People did not stop here on social media, they took out the entire history of Ranbir Sharma, and it also became viral that in 2015, while working as SDM of Bhanupratappur in Kanker district, he was caught taking a bribe of Rs 10,000 from Patwari. He was removed from the post following this action by the Anti-Corruption Bureau. Clippings of news published in many newspapers about this are also being used to prove this claim with their comments and ask how he remains in the post.