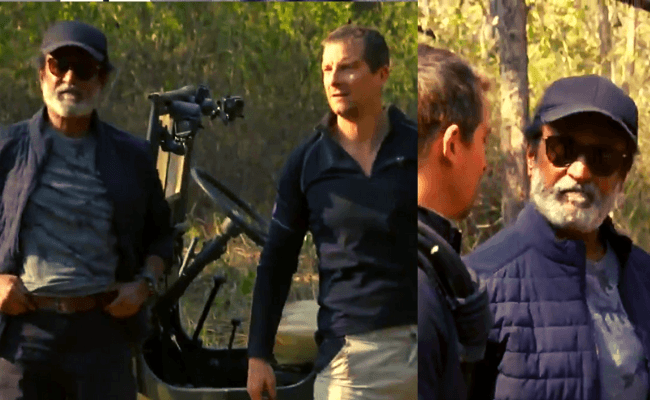 Superstar Rajinikanth aka Thalaivar’s very first small screen appearance will happen this month with Bear Grylls on Man Vs Wild will be aired this month on Discovery Channel. Discovery India has released a trailer of this episode and it shows a pro-active trailer.With his silverscreen projects aside, Superstar Rajinikanth will be enthralling audiences with his special appearance in the universally acclaimed survival reality show Man vs Wild, hosted by Bear Grylls, airing on Discovery Channel. Earlier, Indian Prime Minister Narendra Modi too made a special appearance in the show. Rajinikanth and Bear Grylls will be travelling in the forests of Bandipur in Karnataka. The show is set to air on March 23 at 8 PM.

Bear Grylls posted a teaser in his official Twitter account, which has Rajinikanth trekking with the survival expert as the wade through the difficult terrains. Grylls praised Rajinikanth for his relentless positivity and his ability to counter the challenges thrown to his by the wilderness of the forest.

Superstar @Rajinikanth’s relentless positivity and never giving up spirit was so visible in the wild as he embraced every challenge thrown at him. Respect! Watch Into The Wild with @BearGrylls on March 23 at 8:00 pm. @DiscoveryIN #ThalaivaOnDiscovery pic.twitter.com/s9PodYGv05