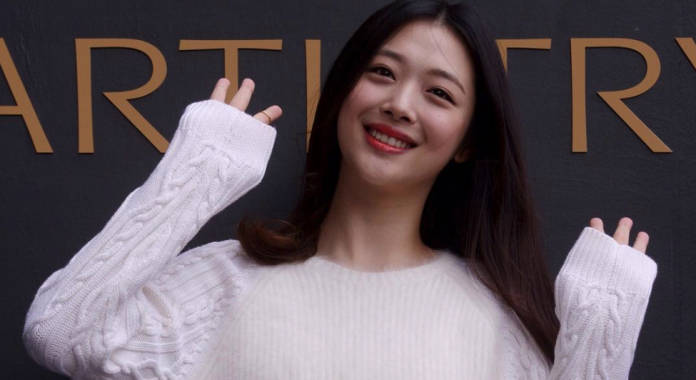 K-pop star Sulli has been found dead in her apartment at age 25, according to Korean news agency Yonhap and confirms SM Entertainment.

The artist’s own manager was the one who found the body as he approached her home, in Sujeong-gu (South Korea), worried about not being able to contact her. The singer, whose real name is Choi Jin-ri, suspended her musical career in 2014 after struggling to receive internet abuse. Sulli returned to acting the following year, but ended up leaving the f (x) group in 2015.

With only eleven years old, Sulli became popular in 2005 as an actress. In music he debuted as a member of the girl band f (x) in 2009 with the single La cha ta .

Then came hits like Pinocchio (Danger) , Electric Shock or Hot Summer , before a break was taken from the entertainment industry in 2014 for being “physically and mentally exhausted by negative comments and false rumors” about her.

According to Koreaboo, the police are now checking if Sulli left a suicide note and will also investigate the exact details of the incident. The world of K-Pop is in mourning after the 25-year-old singer Sulli was found dead at her home in Seongnam.

According to information from the Yonhap agency, Sulli’s body was found at her home near Seoul on Monday, at 3:20 PM, after her manager was heading to the place because she had not answered phone calls for hours. . Paramedics arrived at the scene at 3:39 PM.

According to the first police reports, there was no evidence in Sulli’s home that it was a crime. Sulli’s real name is Choi Jin-ri and he began her career a decade ago as a member of the women’s group “f (x)”. He also made a place on the scene of the shows in South Korea thanks to her participation in television dramas and films.

The police are investigating the causes behind the death of the young woman and so far the main theory speaks of a possible suicide. After passing through the band f (x) , in 2015 the singer decided to leave the band to focus on her career in the world of acting. In the middle of K-Pop, where interpreters tend to take care of every aspect of their public image, Sulli was known for her controversies and her frank way of speaking.

Sulli was involved in controversies for not wearing a bra and posting images showing her nipples. The first of the photographs was published in May 2016 and brought severe criticism on social networks. And just a few weeks ago, one of the singer’s breasts could be seen by accident, during a live broadcast on Instagram. Sulli was a great friend of another K-Pop star, Jonghyun, who committed suicide at age 27, in 2017.

Although the search for a position in the world of acting was mentioned as the official cause of her departure from f (x) it was also mentioned that the young woman decided to take a break from the criticism she faced in social networks. “She was one of the idols (as pop stars are known in Korea) who decided to live her life the way she wanted and that didn’t always make the general public good . For idols everything is about appearance. Everything is monitored and she did not do it, ”music journalist Taylor Glasby told Radio 1 Newsbeat.

Taylor herself published a few minutes ago on her Twitter account a message dedicated to the deceased interpreter: “Sulli, your audacity will be missed, the one you don’t care about, your mischievous humor, your safety, your vitality that helped make af (x) a true legend. The shadows caught you and it should never be like that. ”

Although she had also continued her career in music, with collaborations with other performers, in 2017 she said that acting was the work she saw for her entire life. “I think lately that I could be an actress for the rest of my life. I’ve been thinking that ‘this place’ is doing very well. I used to think not, ”he explained to the magazine“ Grazia ”.

Her way of being so open was also evident when he talked about her social phobia and panic disorder, in the teaser of her reality show Jinri Store. “Social phobia, panic disorder. .. I’ve had it since I was very young. There were times when close people, some of my close friends left me. People hurt me, so everything else fell apart. I didn’t feel like I had anyone on my side or someone who could understand me. That’s why I fell apart completely. ”