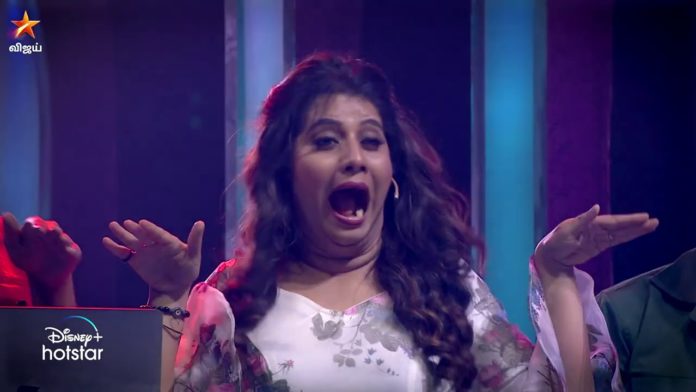 Vijay TV’s superhit reality show, ‘Start Music’ is back on Sunday with yet another gripping episode hosted by Priyanka. The highlight of ‘Start Music’ episode this week was the appearance of Bigg Boss Tamil 4 contestants including Suresh, Archana, Gabi, Somshekar, Anitha and Shivani on the show.

The teams for Sunday’s episode will feature Archana, Somshekar and Shivani in one team. The other team comprises of Anitha, Suresh and Gabriella. The fierce competition between the ex-contestants of Bigg Boss Tamil 4 is the highlight of this Sunday’s episode.

It looks like the teams are on fire with their musical knowledge. However, Suresh is high on the entertainment factor. It looks like Sunday’s episode will set the benchmark for the rest of the episodes on Start Music reality show.

The Celebration round featured an intense competition between the contestants as they launched their ‘punchlines’ against each other.

In the ‘Paada sollathe’ task, Team Suresh has an edge over the other team. Incidentally, Suresh enacted the same song ‘Chinna Machan’ which he danced for with Anitha in the Bigg Boss Tamil 4. However, Anitha was successful in guessing it quickly.