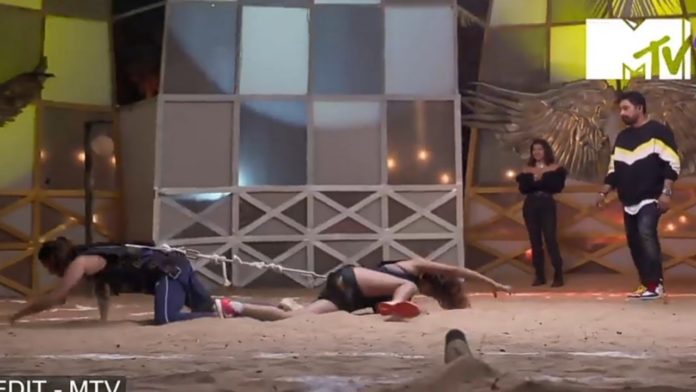 Splitsvilla 13 is on a roll, a lot of things have happened over the last few weeks. The fourth ideal match was revealed, Katvin and Team Boombam are still at war. It seems the Boombam gang is winning this time around. Times are hard, and betrayal is in the air. As the finale inches closer, it seems things get murkier. Shivam’s rivalry with Kat and Kevin has reached a pinnacle.

Shivam asks them to vacate the Golden villa and leave for the Silver Villa but they refuse. So, he removes their name card from the door and drops it in their footwear. This leads to an argument which makes the contestants angry and this leads to a fight. Shivam and Dhruv Mallik got into a violent fight which had to be broken up by other contestants.

The contestants were engaging with the task, when chaos broke out. In the task, there were some questions for which the contestants have to answer while hanging on a rope. Rannvijay notices Sapna whispering the answers to Kat, and he went into a rage. He reprimanded her strongly, and warned her to keep track of her actions. Sapna seemed upset, and netizens are also angry at her actions.

Bhoomika came out as the breakout star, and successfully won the challenge. It seems BoomBaam gang are really working towards dominating the show.

These contestants have been eliminated from the show.

The show is left with only six couples, the challenges will get intense and it looks like there is more to come. According to reports it seems that Kat and Kevin would be either the runners-up or winners. Let’s wait and watch.