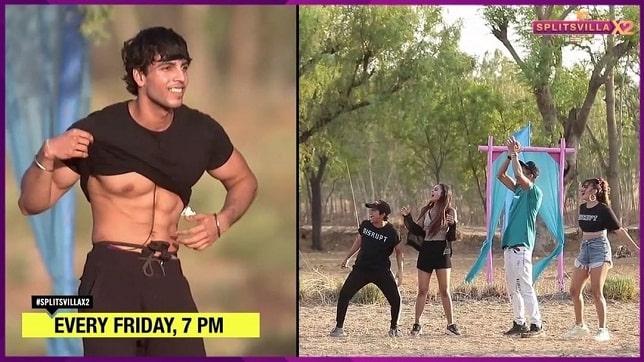 Splitsvilla 12’s episode on the 13th of December starts with a recap of the previous episode. Aahna and Bhavin got dumped last week. Let’s continue with what was left last week, where we saw an intense Bae Watch Session which will be continued.

The Bae Watch session continued from the previous week’s episode. The questions posted by Sunny and Rannvijay were witty and triggered a lot of chaos.

Who is an attention seeker?

Bhavya and Loka get into a heated argument.

Miesha confronts Loka and gets emotional while talking to him.

Bhavya and Arshiya Lock Horns as Villa is on the Boil!

Things get heated up as Arshiya charges towards Bhavya to physically attack her. Contestants stop the fight. Bae Watch Session abruptly comes to an end. Rannvijay declares that least amount of cow dung has been poured on Sambhav and Soundarya. Due to this they get an advantage in next Test Your Bond Challenge. Ashish and Miesha also get a power, where they can put a disadvantage on any couple in next Test Your Bond Challenge as they had the least amount of cowdung on themselves.

At the Villa, Uday is seen clarifying what Piyush had said to him at the Bae Watch Session. Ashish interrupts and says something, which makes Piyush angry. Arshiya and Ashish have a verbal banter between them. Piyush gets hyper and picks a wooden pole to hit Ashish. Rannvijay comes in between and takes Piyush away.

Priyamvada reads the scroll in which Rannvijay mentions that other contestants who don’t have a match yet, should buck up. The contestants reach the task location. Rannvijay explains them the task. The task name was Pyaar Ka Laddoo.

Performers in the task are as follows:

The male contestants had to impress Sunny Leone with their dancing moves. Once she is impressed, they can move forward. Then they had to put as much rings as they want to eat Ladoos.

The Ladoos had Badam between it. They had to collect those Badams. The twist was that the Ladoos were of Methi and Mirchi.

The Chosen ones had to chose who will compete against each other. Ashish and Miesha after discussion chose the following pairs-

Piyush and Arshiya vs Loka and Hridya.

Sambhav and Soundarya vs Shrey and Priyamvada

The total task will be of 15 mins. Sambhav and Soundarya get an added minute extra as they had earned an advantage. Loka and Hridya will get one-minute minus from their allotted time as part of their disadvantage.

Loka impresses Sunny with his dance moves. They first put 3 rings and start eating the Mirchi Laddoos. Loka is quite impressive as he eats around 5-6 ladoos. Hridya, on the other hand eats only 1-2. Hridya pukes during the task while Loka controls himself.

Piyush puts 10 rings at the start. He and Arshiya start with Methi Laddoos. Both of them give their best during the task.

Piyush & Arshiya and Shrey & Priyamvada are in the dumping zone. Bhavya, Hridya and Miesha argue amongst themselves. The winners of this task get gifts from Vega Hairstyling Appliances. The show comes to an end. Tune into Splitsvilla every Friday at 7pm only on MTV.