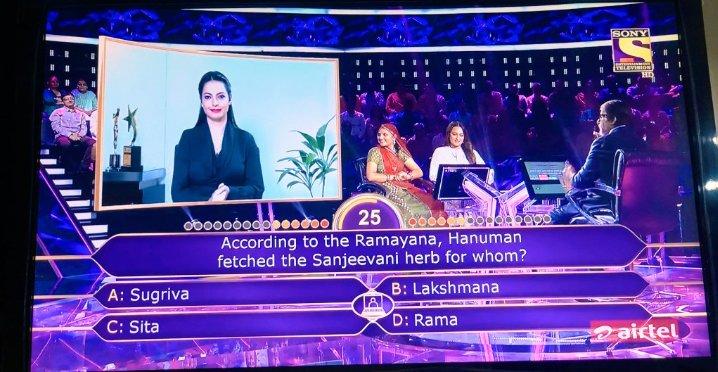 In a special episode this time in Amitabh Bachchan’s show Kaun Banega Crorepati, social worker Ruma Devi from Barmer has appeared on the hot seat. Actress Sonakshi Sinha also came to help her in the show. Sonakshi Sinha is being mocked a lot on social media. Actually, Sonakshi Sinha could not answer a question on the show, she used Life Line to answer that question. In the show, the question was asked for one lakh 2 thousand, For whom did Hanuman fetched Sanjeevani Herbs. Sonakshi Sinha did not know the answer to this question, Sonakshi Sinha seemed to have Rama, while Ruma Devi got Sita.

Very disappointing how can someone be so Dumbo ,????#KBC11 #sonakshisinha pic.twitter.com/3TmshVXtW1

Sonakshi sinha's father is four brothers:
1.Ram
2.Bharat
3.Laxman
4.Shatrughna
Her brother's name is Luv & Kush
Her house name is 'Ramayana'
But she used lifeline for below question???

Bollywood is full of dumb actors, who even don't know their history.#sonakshisinha pic.twitter.com/gAo1wxaX4O

#AliaBhatt #sonakshisinha Crown has been passed to Sonakshi from Aalia pic.twitter.com/zah9ztcO8v

When #sonakshisinha says i don't know, I will choose a lifeline ….

#KBC11 #sonakshisinha
Just a scenario why Bollywood is considered crass and brainless….. Sonakshi Sinha requesting lifeline for this question is justifying that…
Series of events of :- pic.twitter.com/OwU9eEqG6u

This actress whose whole family is named after Ramayan dont know an inch about anything about history of ramayan and hypcrisy is that she proudly said dat she plyed role of scntist n "mission mangal" #shamesonakshi #sonakshisinha #KBC11 atlst tht womn is mor edcated N scial thn U pic.twitter.com/yMoDhxkALv