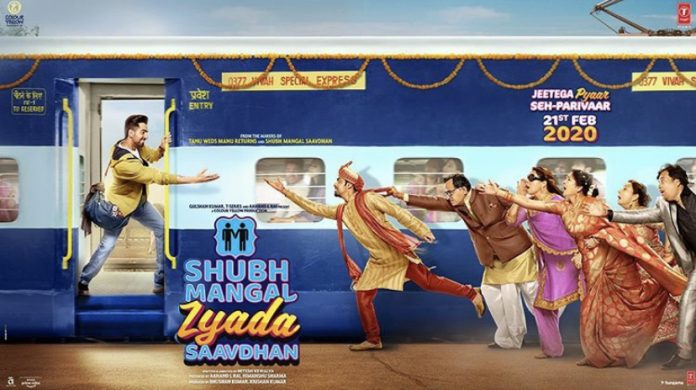 This peppy trailer is yet another feather in Ayushmann Khurrana’s cap. It looks promising and drags you right into the narrative. Shubh Mangal Zyada Saavdhan shows great promise in being an enjoyable rom-com. Mainly not any usual rom-com but between a same sex couple. The two lovers are played by Ayushmann and Jitendra Kumar. They go through various obstacles, trials and tribulations to make their families accept them.

In the trailer, it is seen that Ayushmann is playing a gay man. It begins on such a catchy note that it grabs the attention of the viewer. He is asked when he decided that he wanted to be gay? To which he very smartly asks back, when did you decide that you didn’t want to be gay?

Ayushmann’s character Kartik is in love with his neighbour played by Jitendra. They are both happy in their bubble of love until there comes a time that they need to tell their parents. Ayushmann tells Jitendra to tell his father since he is educated and will understand but to their bad fate the educated itself fail to see the broader picture. Jitendra’s parents are played by the exceptional duo of Gajraj Rao and Neena Gupta. Gajraj is a clear out homophobic and even states that his son has a disease. They even try getting their son married to another girl. Neena’s character is the typical mother who wants to support her son with every decision she makes but it’s astonishing to see her open mindedness in this situation. She even says that she has a mother’s heart so she understands.

The film is directed by Hitesh Kewalya and produced by Bhushan Kumar, and is a sequel to Shubh Mangal Saavdhan, that released in 2017. The original starred Ayushmann with Bhumi Pednekar, with the former having to deal with the problem of erectile dysfunction. Shubh Mangal Zyada Saavdhan is set for a release on February 21, with the perfect casting such as Gajraj Rao, Neena Gupta, Manurishi Chaddha, Sunita Rajwar, Maanvi Gagroo, Pankhuri Awasthy, and Neeraj Singh. This seems to be hit out of the stadium by Ayushmann yet again with its well written dialogues, strong sense of humor and the foundation of a strong message.