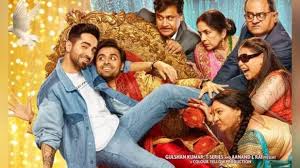 
For years there have been a shadow around the concept of homosexuality. Not only were people finding it difficult to accept it but Indian cinema was finding it difficult ot portray it. But trust one actor to make a movie on an aspect that is unspoken and not dealt with, Ayushmann Khurrana. His genre of films are different and makes issues that have been a taboo for long acceptable. This time arounds he forays into the darkness of homophobia. In Shubh Mangal Zyada Saavdhan, Ayushmann Khurrana plays the role of a homosexual man. He is paired opposite digital star Jitendra Kumar. He reunites with his Badhaai Ho parents Neena Gupta and Gajraj Rao. The film does not delve into a mainstream topic and try to normalise it. This film is a full on family entertainer where in comedy has been infused with reality. Here’s why Shubh Mangal Zyada Saavdhan is the movie to watch this weekend:

Mainstream Hindi cinema has made it a point not to delve into controversial aspect of reality and they have managed to ghost homosexuality and queer rights for as long as possible. It is not like Ayushmann Khurrana to keep away a topic that needs to be spoken off yet is kept mum about. Ayushmann has reportedly said that he needs to be convinced that the topic being delved into is the need of the hour ad then he jumps right in. On a personal front, Ayushmann saw a gay couple kiss after everyone is in bed which shows the difficulty they face to be themselves in a public platform. That is when he realised that this is what needs to be shown on the big screen. Shubh Mangal Zyada Ssavdhan is that ice breaker which will act as a dining room conversation topic and will help people come out of the closet.

Last year saw the release of Ek Ladki Ko Dekha Toh Aisa Laga, the film tried to deal with the topic but superficially. Shubh Mangal Zyada Ssavdhan will be the first time that homosexuality will be broadcasted on the big screen. It aims to penetrate the masses and reach out to homophobes. Films dealing with homosexuality have only been showcased in festivals and as parallel cinema. Shubh Mangal Zyada Ssavdhan will break the shackles of a stereotype.

Shubh Mangal Zyada Ssavdhan will push the boundaries and use humour and relatability to get conservative Indian families to talk about major issues. In the film Gajraj Rao is homophobic and finds it disillusional that his son can fall in love with a man. According to Indian parents it is not natural and is not what our religions teach us.

The trailer of the film brought out features that have never been shown to a community at large. It has become a topic of conversation across the country. If a film can showcase homosexuality then so can we try to normalize it. The trailer has received raving reviews for its sure-footedness. The lead characters Kartik and Aman are sure of their sexual identities and want their families to accept them for who they are. Then begins the never ending battle between a couple and their families. They put a brave foot forward and begin with Aman’s parents. Considering his father is educated they expected him to be more welcoming and accept their love for what it is. It is a sensitive topic and they take small steps but acceptance from families during this time is bleak.

The film is a front-footed movie and does not stand in the bylines trying to explain an aspect without acting delving into it. There is humour emanating from the dichotomy the parents are going through. Parents are unable to accept that their son is gay. This brings in the conflict of a middle class milieu. Every family is different from one another but the core remains the same.

The lovers strive to make their parents accept them and the movie revolves around the situations that follow.

Twitter is going gaga about the film with people even commenting that the filmmakers have taken the right approach towards homosexuality. The film isn’t preachy yet tries to normalize the aspects of homosexuality. It brings out the love shared between two boys. More than showcasing the love it speaks about the reactions of family and moreover parents. This has gone down well with the audience and they are appreciating it. This is a crazy comedy film that shows Ayushmann as the instigator from the eyes of a regressive family who have to widen their horizons and accept their gay son. This film is releasing at an apt time when the passing of section 377 is fresh and people are eager to come out to their families and live freely.

An element that is catching the eye of the audience is the kiss shared between Ayushmann and Jitendra’s characters. The film shows PDA between a same sex couple which ought to be free in society. People consider same sex relationships to be unnatural and abnormal. Gajraj Rao and Neena Gupta represent those parents who do not accept their son to be wired that way. They expect him to settle down with Pakhuri Awasthy’s character solely because as per them that it is a normal relationship. The film serves to be an introduction to the Indian Homophobic society.