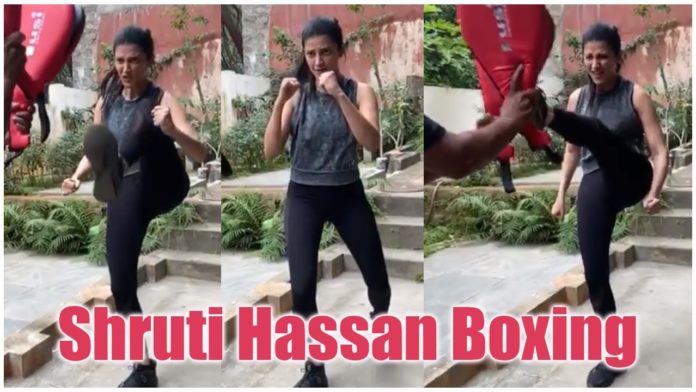 Sruthi Haasan, the daughter of world-renowned actor Kamal Haasan and a leading actress, had recently posted a video of herself learning boxing. Actress Shruti Haasan, who boxed casually like a novice in this video, is seen boxing vigorously in the latest video, where she was seen aggressively boxing like a pro.


Actress Shruti Haasan made her acting debut in the 2009 Bollywood film ‘Luck.’ Later, she debuted in the Tamil film ‘7am Arivu’ starring Surya and has acted with various leading actors like Ajith, Vijay, and Vishal.


Currently, the actress has finished acting with Vijay Sethupathi in the film “Laabam.” The film is expected to hit the screens soon. She is also starring in the upcoming film ‘Salar’ directed by Prasanth Neil and starring actor Prabhas. The film is shot in Telugu and Kannada and later dubbed in Tamil, Malayalam, and Hindi.


Actress Shruti Haasan, who lives in Mumbai with her boyfriend, has been learning boxing really fast. The video of her training with her trainer is currently going viral on social media.