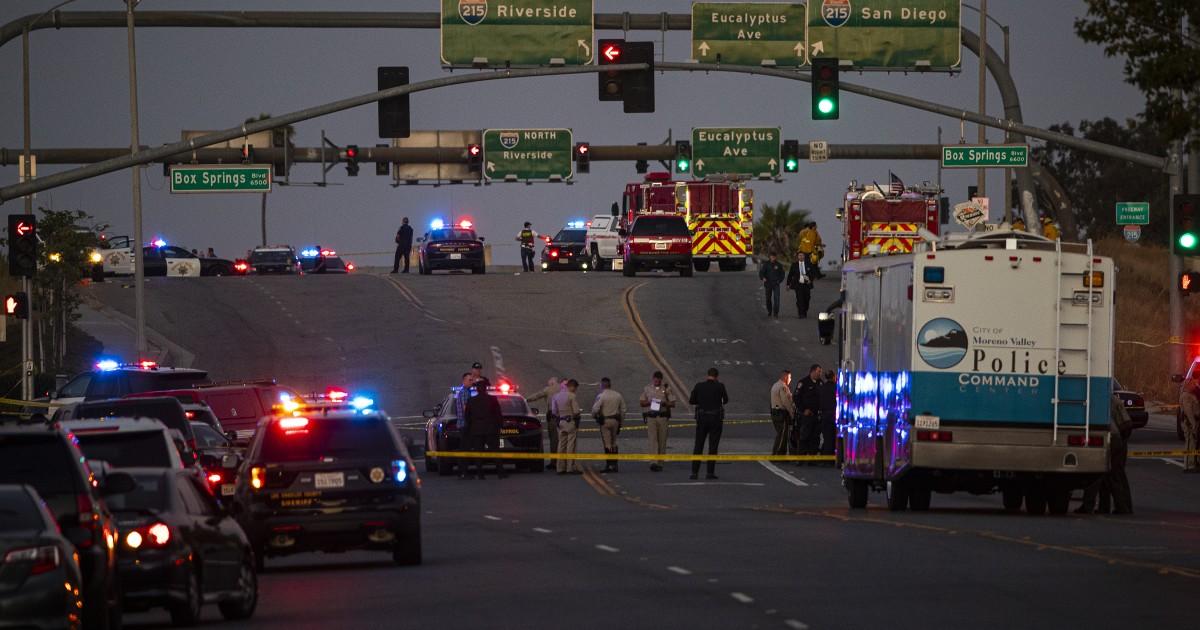 There was a wild shootout on Monday evening at 215 Freeway in Riverside, A CHP Police officer dead and two other officers were injured. Gunman was dead and two other motorists dodging bullets, The conditions of the other two officers were unknown, according to the Riverside Police Department. The gunman, who has not been identified, was taken to a hospital where he was pronounced dead.

The incident started with the California Highway Patrol Officer stopping the suspect for an unknown offence on 215 Freeway, The gunman is believed to have opened fire on the officer after reaching into his truck and pulling out a rifle after his vehicle was impounded, according to initial reports. It is unclear why the vehicle was being impounded.

The officer called for backup and returned fire and the trio soon engaged in a gunfire battle. Law enforcement officers from local agencies also arrived to help.

Dozens of rounds were fired at the scene, according to law enforcement.

It is unknown whose gunfire killed the suspect; that will be determined by the Riverside County coroner, according to officials. Several sources said the suspect was still up and shooting when county sheriff’s deputies and a Riverside police officer arrived.

Jennifer Moctezuma, 31, of Moreno Valley was driving home with her 6-year-old twins when a bullet flew through her front windshield.

Retired Marine Charles Childress, 56, also of Moreno Valley, was in the car behind them when he heard gunfire and saw the bullet that went through Moctezuma’s windshield.

He then heard the children screaming and knew he had to get the family out of the car in front of him.

“I was 21 years in the Marine Corps, and my training just kicked in,” Childress said.

Childress led Moctezuma and her two children, all of whom were unharmed, as they crawled down to the bottom of the bridge away from the gunfire.

The freeway was closed, and Caltrans was urging people to avoid the area. Metrolink said that the tracks near the incident have been shut down and that trains have been diverted.