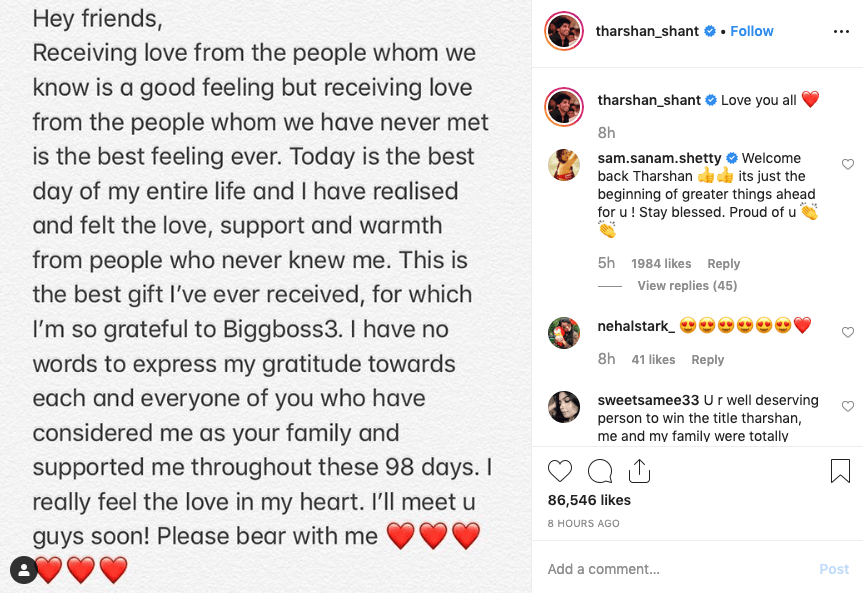 Tharshan’s eviction from Bigg Boss was a real shocker, it’s a shock even for Kamal Hassan as he even said that Tharshan is his favourite contestant. He couldn’t believe that people would have voted against Tharshan as majority of online polls including TheNewsCrunch’s poll shows that 79% people want Tharshan to be in finals and not be eliminated from the house. Also Tharshan has given his first statement via Instagram after getting evicted from the house


“Hey Friends, Receiving love from the people whom we have never met is the best feeling. Today is the best day of my entire life and I have realised and felt the love, support and warmth from people who never knew me.

This is the best gift I’ve ever received, for which I’m so grateful to Bigg Boss 3. I have no words to express my gratitude towards each and everyone of you who have considered me as your family and supported me throughout these 98 days. I really feel the love in my heart. I’ll meet u guys soon! Please bear with me.”

There are news coming from sources that Tharshan was evicted because there cannot be more than one person from a same country in top 3 and since Tharshan and Losliya are from Sri Lanka Bigg Boss had to choose one of them. Since Kavin has already walked out of the show, losing Losliya would be a big drop in TRP, hence they decided to evict Tharshan. Also the vote count of Tharshan and Losliya were almost the same as Kavin’s fans have voted to save Losliya in the end which brought her closer to Tharshan. Since Mugen is from Malaysia and Losliya, Tharshan from SriLanka they cannot have all top 3 contestants from another country than India as this would not make Indians happy, hence they evicted Tharshan.

Tharshan’s eviction has created a ripple and everything related to Tharshan is trending on social media. He has won the hearts of people and this would be a greater win for him than winning Bigg Boss 3 Title.