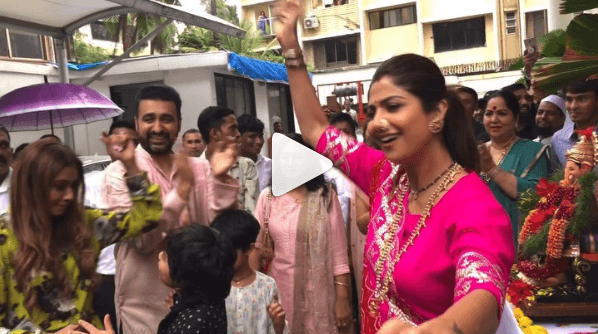 Shilpa Shetty immersed Ganpati Bappa today i.e. on Tuesday. On this occasion, Shilpa Shetty danced fiercely with husband Raj Kundra and son Vivaan. One of his videos is becoming viral on social media. In which Shilpa Shetty is seen doing a tremendous dance on the drums. Despite the rain, there was no shortage of enthusiasm in him and his family.


Ganesh Chaturthi festival has become very popular on Bollywood celebs. First of all, everyone welcomed Bappa with a lot of noise and now he is being immersed with great pomp. Shilpa Shetty’s name is also included in this list. Like every year, she welcomed Bappa to the house with great pomp and immersed him with drums. Shilpa Shetty also performed a tremendous dance while leaving Ganapati from home. Her entire family was there during the Ganesh immersion. Apart from husband Raj Kundra and son Vivaan, her mother Sunanda Shetty and sister Shamita Shetty also appeared with her.

On the occasion of Ganesh Visarjan, Shilpa Shetty is wearing a pink color suit. Along with this, he has also taken a matching bandhaj dupatta which is looking great on him. Shilpa completed the look with traditional jewelery. Husband Raj Kundra was also seen wearing a kurta and jeans. Shilpa’s son Vivaan also appeared in a traditional look, wearing a white kurta with jeans.