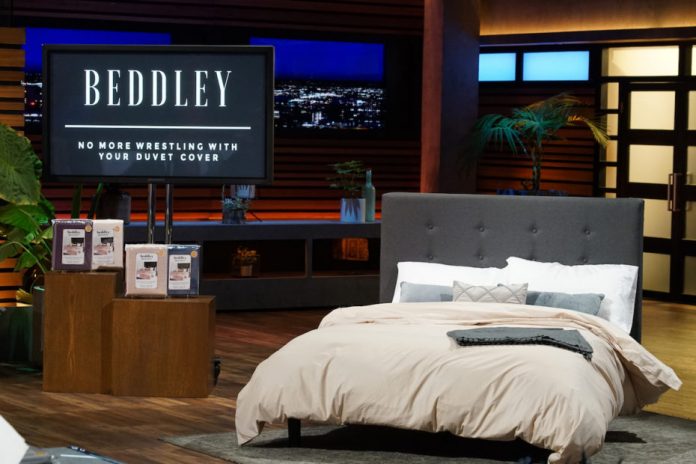 Who doesn’t love snuggling up in the fluffiest, coziest duvet with its plush warmth for a peaceful sleep! But waking up the next morning trying to make the bed while wrestling with the duvet cover. It is like facing a nightmare early in the morning. Well here’s a wonderful solution to the problem, Beddley Duvet Covers!

The Founder of Beddley Duvet Cover!

Lola Ogden is the founder of Beddley Bed Cover. She has degrees in physics, chemistry, and MBA from Columbia Business School. Having worked in finance and technology, she can express her creativity in all endeavors. Besides Beddley she has also started a company called GapEnder, a women’s fitted shirt company. She is also passionate about promoting entrepreneurship among women, first-generation Americans in particular.

The Story behind Beddley Duvet Cover!

Three guesses! Being frustrated with the daily chore of getting her duvet into the duvet cover! She thought there must be some way to make the process simpler! She found a solution through Beddley. The mission is to create products that solve everyday problems and enhances the quality of life for all.

The Beddley Duvet Cover opens on three sides and can easily zips/unzips. No more frustration early in the morning! Trying all the different ways to wrangle the duvet cover in place. Just unzip, place the duvet on top and zip it back up. It is as hassle-free as it can get. It has become a child’s play moreover the children enjoy doing it!

Happy Weekend, Folks! That setting that makes you wish the weekend was here to stay ? Whatever view you have this weekend, make the best of it ? . ?: @tobinproperties

The Sizes in Beddley Duvet Cover!

The Working of Beddley Duvet Cover!

The Beddley Duvet Cover fabric is made of 100% 300-thread Egyptian cotton. It is comfortable, soft, moisture repellant and breathable. Air can pass through the porous fabric to alleviate the restlessness some people feel while using the duvet. The Beddley Duvet Cover has a patented three-sided nylon zipper system with dual zipper pulls. There are four corner ties to prevent the duvet from shifting inside the cover. The purity of the fabric gives a soft sheen as an added touch of luxury. The covers are made and patented in the US.

? Our Revolutionary Easy-Open white duvet cover is pure luxury! Fitting your duvet is effortless with our patented technology. Your luxury duvet or comforter is quickly and perfectly fitted, so you can enjoy sleeping on a cloud ☁️?

The maintenance of Beddley Duvet Cover!

Just zip it off, it is so light that it can easily fit into a regular washing machine and then zip it back in. They are available in stylish colors that include white, black, grey, peach, and purple. It is so easy to change that you can change the look of bedding as per your wish.

The Models and Pricing of Beddley Duvet Cover!

The Sleep Easy model comes in several colors and patterns. The pricing of sleep easy queen size cover is $ 139 and the king-size cover costs $149.

The Zero Stress model is available in three colors. The pricing of zero stress queen size cover is $165 and the king-size cover costs $185.

The Availability of Beddley Bedding Cover!

As of now, they are only sold directly through the company’s website.

The Reviews on Beddley Bedding Cover!

The Beddley Bedding Cover has received raving reviews from users who were frustrated with the conventional duvet covers. Many customers swore they have become devoted to the product.

Will the sharks be just as impressed with Beddley? Find out this Friday on the 18th episode of the 11th season on ABC Shark Tank at 8 PM.