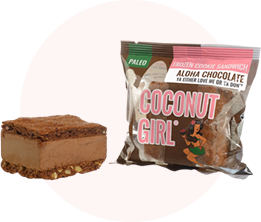 A dessert we can have without feeling guilty of cheating on our diet? It sounds like a dream come true for all the dessert-loving people who are too conscious about their health.  A paleo ice cream made of natural sugar! Let’s find more about it.

?? As seen on Shark Tank! Dairy-free, gluten-free, and guilt-free nice cream sandwiches are the perfect treat to stay healthy while stuck at home If you missed the episode, watch it on Hulu or ABC on Demand!

Franchesca Yamsuan, born in the Philippines moved to southern California when she was young. She is fond of biking, surfing, and hiking. Going to the gym is the usual routine for her. When the Paleo challenge was introduced in her gym, she was all enthusiastic about it. She is a graduate in culinary sciences.

The story behind the coconut girl paleo dessert!

Franchesca’s favorite healthy food is ‘dates shake,’ her combination of dates and coconut smoothies. In a random experiment, she decided to put her dates shakes into her ice cream maker and eureka! The result is a Paleo ice cream! She shared her recipe with her friends in the gym and it became an instant hit.

She kept receiving more and more orders, thus only through the word of her mouth her business got going. We all have heard about the food truck but Franchesca again decided to be unique and opted for a food bike calling it, “Icicle Tricycle.”

If life gives you ?s, turn it into (n)ice cream ? Our nice cream sandwiches are dairy-free, gluten-free, naturally sweetened & GUILT-FREE! Now, that’s COCO-NUTZ! ?Want to find Coconut Girl? Click the ? in our bio to find her

A step ahead for the coconut girl paleo dessert!

Every weekend for the fitness event Franchesca was there selling her coconut ice cream. It was there she noticed her customers making sandwiches with the ice cream. She decided on making a paleo cookie. After going through several trial recipes she found the perfect combination of creaminess and texture by using almond butter.

The cookie deliciously complements the ice cream made with coconut milk and sweetened naturally with honey, dates and maple syrup.

If you can’t pronounce it, don’t eat it. Made with Aloha ? visit our website to find a store near you ? (link in bio)

The sandwiches are 100% natural. They are gluten-free, vegan, soy-free, paleo free of chemicals and artificial food coloring.

Such a delicious sandwich with only 250 Calories!

It is the first and only frozen cookie sandwich!

The coconut girl paleo dessert sandwiches are now available in around 70 grocery stores of Southern California, Nevada, Arizona, and Hawaii.

The coconut girl paleo dessert true to its roots!

Franchesca has started the coconut girl all by herself with only a determination of providing delicious desserts to the ice cream lovers with restrictions. Even though her business has grown continuously she has not forgotten the local suppliers who supported her in the beginning. To this date, most of her ingredients are provided by these local suppliers.

All you need is ?? Even better when they’re guilt free! ? AZ, NV & HI – find our nice cream sandwiches at your local @wholefoods in July!! ?

Can the coconut girl manage to impress the sharks just as much? The episode features on 6th May. Stay tuned for updates!