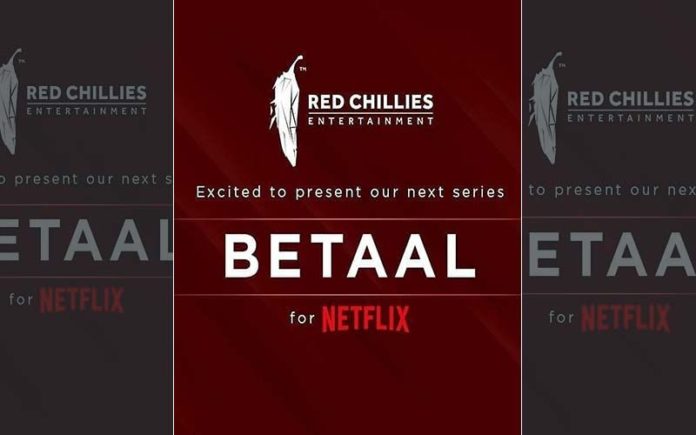 Netflix never ceases to surprise with its content. Netflix recently released the first look of its upcoming Indian original series, Betaal. The zombie-horror has been produced by Shah Rukh Khan’s Red Chillies Entertainment and will be released on May 24. The first look of the show brings to forefront the main characters striking an ominous pose. While one character is holding a rifle, another is holding a lantern. Spooky indeed.

Netflix has released several Indian original series in 2020. First out of the gate was Jamtara, followed by Taj Mahal 1989, She and then Hasmukh. The streaming service’s most recent Indian original film was Mrs Serial Killer. Betaal is co-produced by Jason Blum’s Blumhouse Productions, SK Global Entertainment, and Ivanhoe Productions.

During a time when OTT platforms are our only solace it is great to see Netflix catering to the needs of the audience.

The first look of Betaal is intense. It shows a very tense Viineet staring into the camera while the supporting actors look as tensed as he is by his side. One is holding onto a rifle while the other is carrying a lantern.

A remote village, unseen and unknown, becomes the battleground of a breathless battle when a two-century-old Betaal, a British Indian Army officer, and his battalion of zombie redcoats are unleashed. With Indian police pitted against the undead army, hapless villagers are trapped in a horrific, edge-of-your-seat conflict.

There is nothing better than a good old thriller to catch the eye of the audience. Indian audience looks towards Hollywood for a thrill but this time around they won’t have to look far. Betaal is based in a remote village that becomes the theater of a breathless battle when two-century-old Betaal, a British Indian Army officer, and his battalion of zombie redcoats are unleashed.

With Indian police pitted against the undead army, hapless villagers are trapped in a horrific, conflict that leaves you thirsty for more.

The series’ headliner is Patrick Graham, who has previously directed the horror miniseries Ghoul for the streaming service. Red Chillies has earlier produced the spy thriller Bard of Blood on Netflix, and has Class of ‘83, starring Bobby Deol, in the pipeline. An interesting line which is much awaited by the audience.

How to watch Betaal Web Series?

To watch the film follow the next few steps: