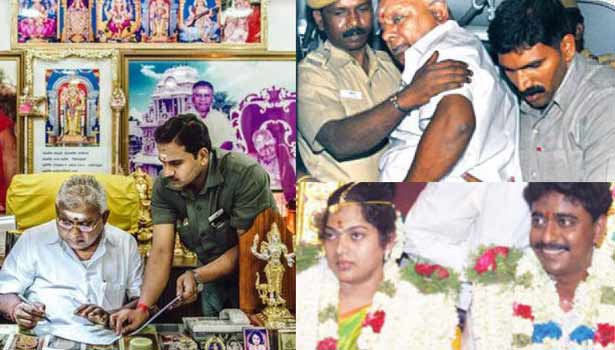 Saravana Bhavan founder P Rajagopal who surrendered to police last week for his Life Term punishment passed away today morning following cardiac arrest last night. Doctors have confirmed his death due to Heart Attack and he was 72 years old at the time of death. Saravana Bhavan P Rajagopal pioneered the concept of centralised kitchen for South Indian foods and even today the restaurant is famous for South Indian Dosai, Idlies and having branches all over the world. He was a staunch follower of lord Murugan and a devotee of Kripanandha Variyar.

Although he was born into a low income class family of farmers, Rajagopal managed to prosper as a businessman, and built Saravana Bhavan chain of restaurants, which now has a branch almost all over the world. He came to Chennai in 1968 and opened a series of tiny provision stores. He opened his first restaurant in 1981, at KK Nagar – one that served simple South Indian fare – idli, dosa and vada, made using high-quality produce. Quite a bold move for him back then, considering his grocery stores were in debt and most items on his menus sold at less than a rupee, leading him to incur losses as high as Rs 10,000 a month. Then things picked up and now he operates his chain of hotels across the world.

In the early 2000s, Rajagopal, on the advice of his astrologer, pursued Jeevajyothi, the daughter of one of his employees, for marriage, but she rejected his advances. He orchestrated multiple threats against her family, and in 2001, he successfully orchestrated the kidnap and murder of her husband. He was sentenced to life for the murder.

In 2009, the brand value of Saravana Bhavan plunged after Rajagopal’s conviction. More recently, in March this year, the Supreme Court upheld the verdict and was asked to surrender to the authorities by July 7. He surrendered on July 9, after the court rejected his counsel’s plea to extend the date, on grounds of ill health. Days later, the tycoon suffered a heart attack and was transferred to the prison ward of Stanley Hospital. A plea was registered by his son, requesting a transfer to a private hospital which was granted. On July 18, Rajagopal breathed his last.