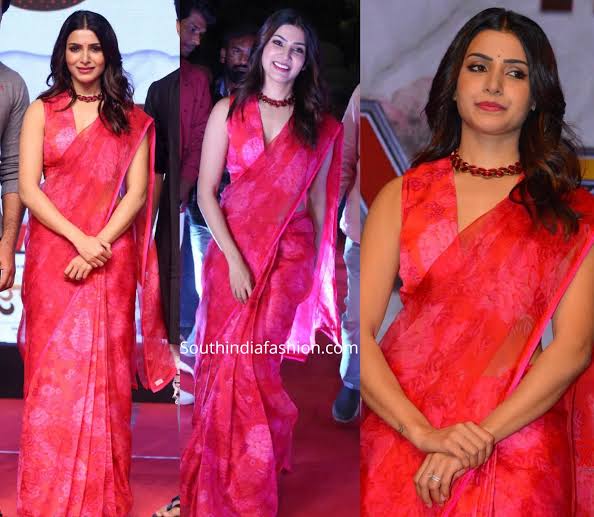 Leave to Samantha Akkineni to leave us drooling over her looks. She knows exactly what works for her and uses it to perfection. She made us go gaga over a red floral saree that she carried off at the promotional event of her upcoming film, Jaanu.

Big week this one #Jaanu #releasingfeb7th

A post shared by Samantha Akkineni (@samantharuthprabhuoffl) on Feb 2, 2020 at 1:02am PST

She envelops her beauty and carries it off with simplicity. Samantha Akkineni never ceases to impress with her exceptional style statements. The red carpet or the airport she aces her looks with elegance. She is one of the few actresses in the South Film Industry who carries off a look with panache and effortlessness. We melt to the ground when we see her walking in the airport or when she decides to make us faint with such looks.

A post shared by Samantha Akkineni (@samantharuthprabhuoffl) on Feb 2, 2020 at 12:53am PST

At the pre-release event of her upcoming film Jaanu, which is the Telegu remake of the the Tamil film 96, Samantha wore a red and pink floral saree by Raw Mango and she took our breath away. She looks like an angel floating across the surface of the earth. She furnished her look with soft open curls and mild smokey eyes. She had bright lips, bindi and accessorised with a stunning necklace by Amrapali Jewellers. She was styled by Preetham Julkar and her makeup was by Sadhna Singh.

A post shared by Samantha Akkineni (@samantharuthprabhuoffl) on Feb 2, 2020 at 1:00am PST

She will be next seen on the big screen opposite Sharwanand in the remake of the Tamil film 96. The film is produced by Dil Raju under his production house Sri Venkateswara Creations. The film is set to release on February 7th.

Suhana Khan Gets Schooled For Her ‘Exposing’ Picture on Instagram, Is Social Media Policing Right or Wrong?