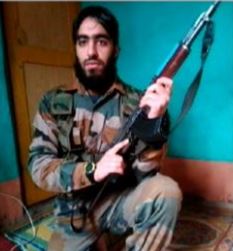 Saifullah Mir is the new Commander of Hizbul Mujahideen in Jammu and Kashmir. He will succeed Riyaz Naikoo, the fallen guy who was killed by the Indian Security Forces.

Recently, the Chief of Hizbul has accepted that Indian Security Forces have killed 80 of his boys, including Naikoo.