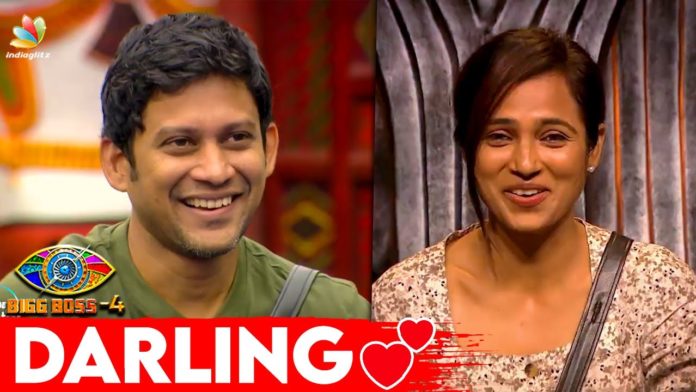 Ramya Pandian and Somsekhar’s romantic track in the Bigg Boss Tamil house is a new and developing track. Many fans pointed out that Ramya and Som look cute to together. It all started when Som revealed that Ramya gave her a chocolate, which he was hiding for several weeks. He wanted to give it back to her the day he gets eliminated. However, when Rio, Archana and Nisha made fun of him, he gave the chocolate to him.

RAMYA AND SOM ARE A HAPPY COUPLE IN NEW TASK

Bigg Boss organisers took cue from this and decided to cash in on this. In today’s task, Ramya and Som will play husband and wife. After the task announcement, Som called Ramya ‘darling’. Their daughter is Gabriella alias Gaby in the task. Together, the trio has to flick the will of their grandmother. Archana Chandoke is the grandmother in this task. Ramya, Som and Gaby cleverly made Archana believe them and let them guard the locker.

The task is a play on the diamond task that Shakthi took part in Bigg Boss Tamil Season 1. In the promos, Balaji seems to be trying so hard to take the will out of the locker.