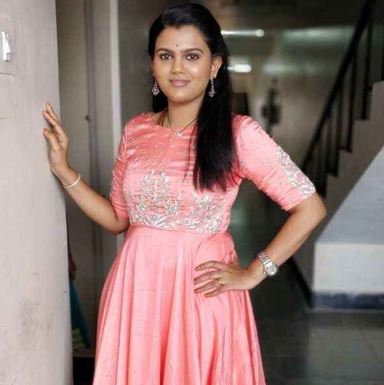 Pranavi Acharya is a playback singer, anchor and dubbing artist in the Telugu film industry. She sung about 200 songs in 70 different films. Pranavi Acharya, who came in to limelight for her songs in Sri Ramadasu, Happy Days, Yamadonga and Lion

Pranavi Acharya is one of the celebrity to speak out about being subjected to sexual harassment in the film industry. she said that she was asked for sexual favours in order to give chances for her to sing in the films in the initial phase of her career. She also revealed that she never regretted to take a stand and warned him strongly.

She has begun her singing career as a playback singer in films at an age of 17. Sri Sasi Preetham, a music director first gave her a chance to sing in her debut film Gulabi and her debut song is “Ee Vela Lo Neevu” written by Sirivennela Sitaramasastri.
She has worked under the supervision of music directors like M.M. Keeravani, Kalyani Malik, Chakri, S.V. Krishna Reddy, Koti, Raj, Vandematharam Srinivas, Mani Sharma, Micky-J-Mayer, Devisri Prasad, R.P. Patnaik, Chakri, Nihal, Anup, S.S. Thaman etc.