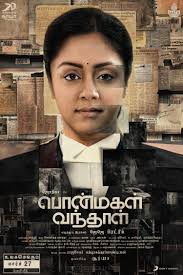 A new Tamil thriller starring Jyotika has been announced, ‘PonMagal Vandal.’ The movie is written and directed by JJ Fredrick, It is going to be his debut film as a director. The film is produced by Suriya and Rajsekhar Pandian under a 2D Entertainment banner. The movie stars Jyotika, R. Prathiepan, K. Bhagyaraj, and Pratap Pothen in pivotal roles.

Music Composition of the movies is by Govind Vasantha. Cinematography by Ramji and editing will be done by Ruben. Besides directing, JJ Fredrick is also the story writer.

The first look of the movie was released by Suriya on his twitter handle. In the movie, Jyotika is seen in the role of a lawyer. After her last venture, Raatchasi, she has two more releases awaiting this year. Jackpot and an untitled project with Karthi.

Bro? Such a Sweetheart you are .. Thank you so much for the wonderful Lyrics.. As always Luv u ?? https://t.co/dUfbT2BlKP