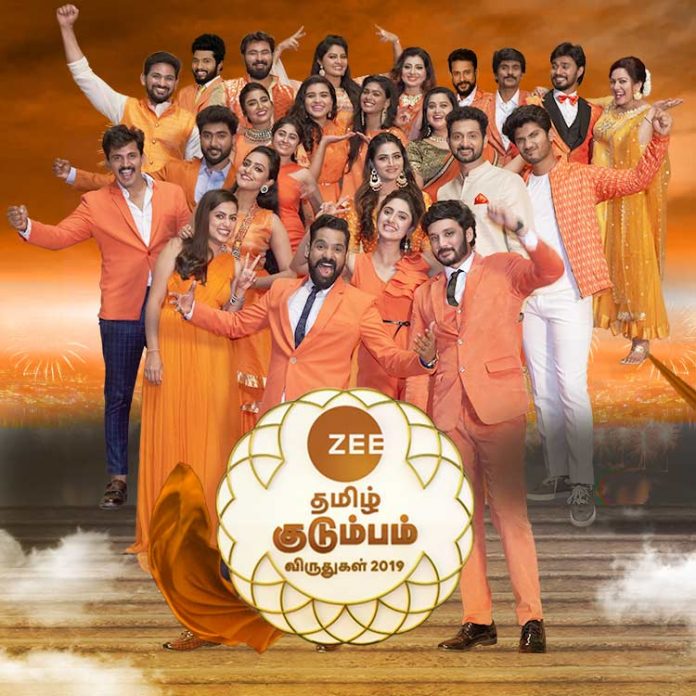 Chennai, 14th January 2020: Living up to its promise of satiating the diverse entertainment needs of the Tamil audiences, leading Tamil General Entertainment Channel – Zee Tamil has announced its festive line-up surrounding the joy and celebrations of Pongal. With a wide selection of shows, across varying genres, the festivities are set to be taken up a notch.

The festivities begin on 15th January with a Carnatic music special, ‘Swara Raga Thalam’, at 8:30 AM. The show will feature a short concert, ringing in the auspicious occasion of Pongal with divine music. This will be followed by a special comedy show ‘Joker’, at 9:00 AM. With Bublo Pritviraj, Chinni Jayanth and Sakshi Agarwal as judges, the show will bring together mimicry artistes and stand up comedians who will entertain the Zee Tamil viewers with a rib-tickling performance.

Enjoy a morning show of ‘2.0’, with Zee Tamil at 10:30 AM. An R. Shankar blockbuster, 2.0 brings back the story of Dr. Vaseegaran and ‘Chitti’ the robot, both played by Superstar Rajinikanth. 2.0 is a classic story of vengeance, sought by ‘Pakshi Rajan’, played by Akshay Kumar, on mobile phone users owing to the havoc it wreaks on avian life, ultimately causing a rapid decline in its population. The movie is a sci-fi visual treat thanks to a host of internationally acclaimed technicians who have worked on the movie. It is further enhanced by a scintillating score by maestro A.R. Rahman.

This will be closely followed by a World Television Premier of ‘Kennedy Club’ at 1:30 PM, a deep and engaging movie taking us along on the journey of an all-women kabaddi team and the struggles they face as they gear up to compete in a national-level championship. This film features actor-director M Sasikumar, who plays Muruganandham, leading the kabaddi team through this journey. The film also showcases Director Bharathiraja in an integral role.

At 4:00 PM, sit back with a tub of popcorn for some nonstop entertainment with part II of the ‘Zee Cine Awards’ main event. The finest of Tamil cinema – actors, writers, technicians, etc. – will be felicitated for their invaluable contribution to Tamil cinema. This will be punctuated with a host of fantastic performances by many of your favorite movie stars and singers. The stage stood witness to the some of the biggest names in the Entertainment industry including Kamal Hassan, Dhanush, Nayantara, Vijay Sethupati, Samantha, Shankar, A R Rahman, Shreya Goshal, Nawazuddin Siddiqui, Sudheep Kicha among others.

Start the second day of the festivities with ‘Namma Veetu Pongal’, at 9:00 AM, a Zee Tamil Pongal special hosted by Kamal wherein Zee Tamil’s leading stars come together for a gala time to entertain their viewers. At 10:00 AM, gear up for a nail-biting kabaddi match on ‘Celebrity Kabaddi’ hosted by Mirchi Vijay. This show will bring to the viewers a match between two teams comprising of women who include Zee celebrities and kabaddi players from Tamil Nadu.

At 11:00 AM, sit back and enjoy ‘Kanaa’, a sports drama reminiscent of the patriotic spirit of movies like ‘Dhoni’. The movie, based on women’s cricket, is a critically acclaimed box office blockbuster. The movie stars Sathyaraj, Aishwarya Rajesh and Darshan in lead roles and Sivakarthikeyan in a supporting role. Arunraja Kamaraj has worn a director’s hat for the first time in this film.

Enjoy an exciting outdoor game show ‘Mr and Ms Local’, where 7 foreigners will be paired with 7 of Zee Tamil’s beloved stars to help groom and train them in the traditional Pongal games. This show, hosted by Madhan and Kathir, will air at 2:00 PM. Wind down the two-day Pongal bonanza with the World Television Premier of ‘Thumba’ at 4:00 PM. Thumba is a fantasy, adventure, comedy and drama movie rolled in one. The movie is the story of how two painters and a photographer hustle to stop a forest officer from poaching a tiger. The film stars Darshan and Dheena in leading roles. This movie also introduces newcomer Keerthi Pandian in a lead role. Actor Jeyam Ravi also plays a guest appearance in Thumba.

Speaking on the occasion, the channel spokesperson said, “This festive season, Zee Tamil strives to indulge its viewers with the perfect blend of music, drama, comedy and cinema that the viewers can enjoy from the comfort of their homes with their loved ones. We are confident that this unique assortment of shows lined up for the two-day Pongal holidays will showcase Zee Tamil as the ultimate destination for viewers looking for quality content”.

~ Celebrate this Pongal with magic of cinema only with Zee Tamil and Zee Tamil HD ~
About Zee Tamil
Zee Tamil is the Tamil General Entertainment Channel of Zee Entertainment Enterprises Ltd (ZEEL). Launched in October 2008, Zee Tamil offers a variety of shows that cater to the entertainment preferences of Tamil audiences across the world. From fiction shows to reality shows and talk shows, the channel with its multi-genre offerings is widely accepted as the one-stop family entertainment destination. Zee Tamil has created multiple blockbuster shows like Mr & Mrs. Khiladis, Junior Super Stars, Dance Jodi Dance, Sa Re Ga Ma Pa whose unique and never-seen-before formats have appealed to viewers across age groups. The holistic mix of content and programming options make Zee Tamil one of the fastest growing Tamil GECs in Tamil Nadu.

Tamil Actor Maran died due to COVID 19, here are the details