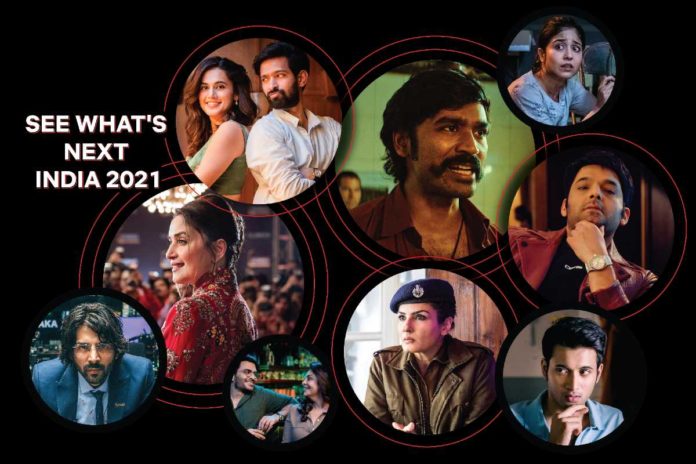 Netflix India has aggressive plans for 2021. With the competition among OTT platforms increasing by the day, Netflix aims to consolidate its position in the Indian market. The Covid-19 lockdown has resulted in a surge in the number of subscribers and Netflix aims to make the most of it. Another blessing in disguise for OTT platforms is the direct OTT release for blockbuster movies.

#NetflixIndia massive line up for 2021 has been revealed with 41 titles including films, series, docs and comedy shows.

In terms of the Netflix Originals, several superhit web series like Little Things, Delhi Crime, Jamtara, Masaba Masaba, and Kota Factory will be returning to Netflix for their second season. Feels Like Ishq, Finding Anamika, Decoupled and Mai will be some of the new Netflix Originals web series releases for 2021.

However, the comedy premium league, Kapil Sharma’s standup special will be the highlights of Netflix’s release in 2021 in the comedy shows section. Indian Predator, Searching for Sheela, and Crime Stories will be the Documentaries that will be released on Netflix India this year.