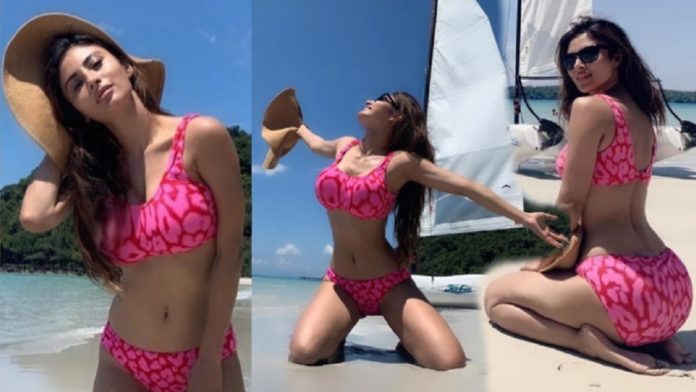 ‘Naagin’ actress Mouni Roy remains in the limelight due to her bold photos which she shares frequently on social media. The ‘Naagin’ actress is active on social media and continues to share her glamorous pictures. Now some pictures of Mouni Roy are becoming increasingly viral, in which she is looking very stunning in a transparent dress. She is seen posing in a black bikini. Because of these photos, Mouni Roy has once again come into the discussion. Fans are lavishing love on her pictures.


Sharing these pictures, Mouni Roy wrote in the caption, ‘I took a deep breath and listened to the old brag of my heart. I am. I am. I am…’ People are commenting fiercely on this picture. Mouni Roy has shared many pictures back to back. She is seen in a black bikini. On top of this, the transparent dress is making her look more spectacular.


Earlier, Mouni Roy shared pictures of a photoshoot in which she looked very hot in a pink color dress. She wears matching pants with a pink dress. She carries a pink shrug which is making her look more attractive. She is seen looking at the camera and posing differently. She looks very beautiful and charming in the open hair look.


Mouni Roy, who became famous in the house from the super hit TV serial ‘Naagin’, entered Bollywood with the film ‘Gold’ with Akshay Kumar. Now there is a lot of discussion about her film ‘London Confidential’. Mouni Roy is very excited about the film. She acted as a RAW agent for the first time in the film.