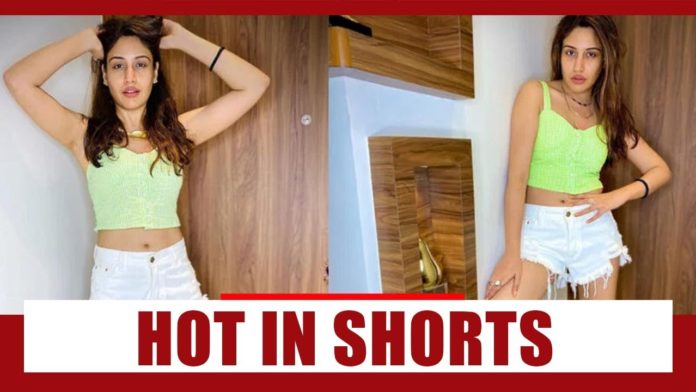 Naagin 5 actress Surbhi Chandna is very active on social media. She is playing the character of Bani in the Indian supernatural serial ‘Naagin 5’. She has a strong fan following. Now Surabhi Chandna’s latest bold photoshoot is becoming viral on the Internet. The actress is seen posing in a seductive pose in a black cropped top.

Surabhi Chandna has shared many pictures, which are seen in black cropped tops and jeans. She is wearing a stylish silver layered chain around her neck. She has complimented her look with free hair. In many pictures, she is seen carrying a leather jacket, while some do not. Fans are going crazy after seeing her style. She wrote in the caption, ‘Bar a change of my super sexy saree.’ Fans are commenting on these pictures of Surbhi Chandana.


Earlier, the actress shared some more pictures in which she was seen in the yellow dress. Surabhi Chandna is seen in yellow and purple color sarees in these pictures. With this, she has carried a stylish yellow blouse. She is wearing a unique necklace around his neck and completes her look with open hair. Sharing these pictures, Surbhi Chandna wrote in the caption, ‘Boho Vibes Don’t Ask Me Why.’


Significantly, the actress who made her mark with the serial ‘Ishqbaaz,’ Surbhi Chandna, is a well-known face of the TV world. Surbhi started modeling right from college time. She first started with SAB TV’s popular show Taarak Mehta Ka Ooltah Chashma. She got a small role in the show. But the makers of this show were going to replace her because she could not remember the lines. Actress Surbhi Chandna herself revealed this.