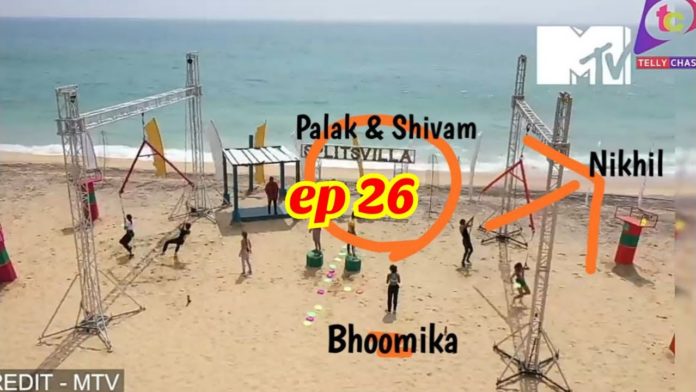 Shivam’s gimmicks turn awry as he tried to wear Kat’s name in his foot to provoke Kevin. The frustration beckons Kevin’s redemption in his first ever Silver Villa moment. However, the limelight falls on the entry of four wilcard entries this week in the Villa.

The first task after Shivam and Pallak take the ideal match throne is ‘Whiskey disky’. The following pairs will perform the task:

Since Shivam and Pallak entered the Golden Villa yesterday, they will not be performing the task. The task features an intense couple task where the girls are left hanging while they have to catch the discs. Apparently, it is Kevin’s time to prove his might in the villa. Splitsvilla 13 inches closer to the finale and the competition will intensify in this task.

There is a gruesome fight between Shivam and Dhruv and the latter pushes Shivam. Things turn awry in the villa but all is not well for the ‘Let’s do it’ gang. Sapna’s visible cracks in alignment with Kevin’s team create ripples. However, the ‘Boombam gang’ consolidated their strength in the Golden Villa.

Shivam and Pallak were the last ideal matches in Splitsvilla X3. It will be interesting to see which contestants make it to the Golden Villa ahead of the crucial dome session next week.

Ten contestants were eliminated from Splitsvilla 13 so far. However, Arushi was eliminated this week. Three weeks ago, Nikita and Samarthya became compatible matches. As a result, there will be single elimination in the next week’s dome session (27th episode).

Will the Villa get its next ideal match this week? 😯#MTVSplitsvillaX3 co-powered by @philipsindia, @ManforceIndia, @DenverForMen and ONN Polos & Tees every Saturday at 7 pm. Catch the action 24 hours before TV on @VootSelect pic.twitter.com/dvpj3DMTkt