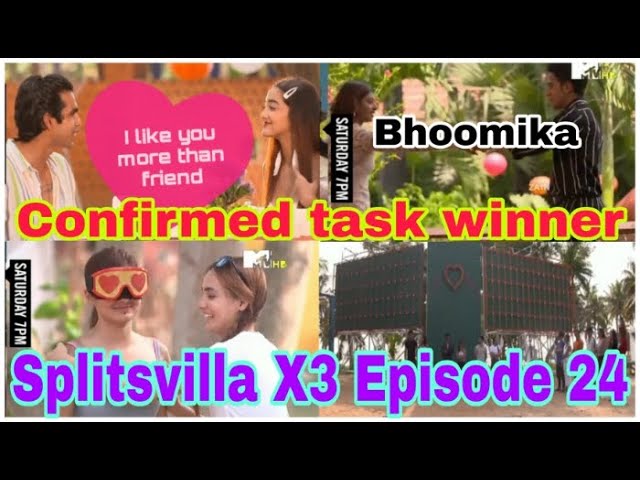 There were clear ripples in the Boombam gang as the ideal partners for the tasks were a factor of debate. Pallak was keen to go on a date with Nikhil but Bhoomika was insisting on staying with Nikhil. Pallak was not ready to pair up with Shivam yet again.

The pool date was fun and filled with spicy moments. There were lot of discussions between Nikhil and Pallak during the pool date. However, the focus of the 24th episode of Splitsvilla 13 shifts to the Golden Opportunity winners.

The Boombam gang witnessed its evident cracks as Nikhil ironed out misunderstandings with Pallak. However, this week’s task called ‘Oh Fish’ will feature very important immunity for the vulnerable Silver villa contestants. Meanwhile Trevon and Nikita got into the date mode and Trevon was keen on making the connection work. Arushi and Trevon’s connection was visibly not working.

The major decision before  the task was to see who will Trevon be performing with. Trevon and Arushi’s pair performed fairly well during the task and hence, it was a shocking twist to see Trevon and Nikita performing together.

The date between Nikita and Trevon looked desperate as the duo depicted a very fake bond as they were just friends. Shivam and Bhoomika tried to the make the most of their connection created by destiny and not by choice. As Arushi was not chosen by anyone, she entered the dumping zone by default.

The task was performed by the following pairs:

The task involved finding out which couple manages to add to the most amount of heartbeats. ‘Dil Hai Ki Janta Nahi’ task is the Golden opportunity task for this week. The ideal match will spin the contesting pairs and as the contestant falls, their heartbeat falls. However, the competition intensified with a shocking twist.

Trevon and Nikita cheated by revealing the answers. As a result, the duo was penalized for two points. However, Nikhil and Shivam made the most of this loss as they portrayed the best side of their connections. Nikhil and Pallak impressed with the maximum number of answers.

According to reports, the winner of task is Shivam/Bhoomika and Nikhil/Pallak. As a result, we will see in an epic clash for the Golden Villa entry between the two gangs.

Nine contestants were eliminated from Splitsvilla 13 so far. However, Samarthya was eliminated last week. Two weeks ago, Nikita and Samarthya became compatible matches. As a result, there will be a single elimination in the next week’s dome session (24th episode).