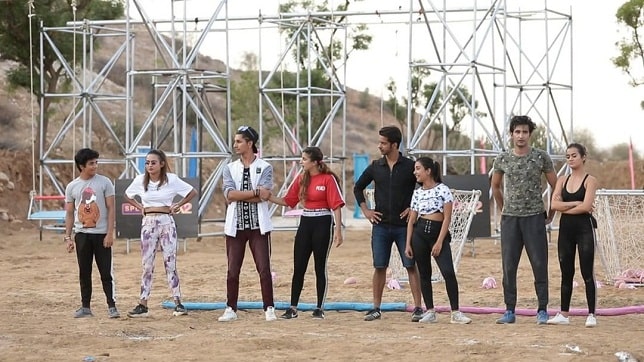 In the last Episode, we saw how Shrey & Priyamvada won the task against Sambhav & Soundarya to secure the third spot into the Semi Finale. Later, in the dome session, Piyush and Arshiya got dumped by the Chosen Ones. But there was a twist, wherein, the Ex-contestants came and took away the dumping powers from The Chosen Ones. They also had arguments with The Chosen Ones. Due to this, Piyush and Arshiya got saved and Sambhav and Soundarya got dumped as the Ex-contestants voted against them.

The show starts with Bhavin and Bhavya sorting out their differences. But Bhavya doesn’t want to sort them out. She tries to explain the whole situation to Bhavin. Ashish tells Bhavya to remain strong. The Ex-contestants discuss and spend time amongst each other.

Alfez Returns Back to the Villa!

Alfez returns back to the Villa. He gives a surprise to Aradhna. She is shocked as well as happy to see him back. Aradhna gets a bit emotional. Their group discusess whatever has happened when he was absent.

Alfez then wakes up Bhavya and Soundarya by surprising them. They talk good to each other on their face.

Gifts for the Female Contestants

Every female contestant gets gifts from Savya Jewels. Scroll tells them to get ready for the tasks.

The Challenge task is between Alfez & Aradhna and Piyush & Arshiya. The Challenge name is ‘Pyaar ka Bojj’. In this task, the male performers have to lift the female performers on their shoulders. In a ring there are many sacks. The guys had to pick those sacks and give it to the girls. They had to throw them in a basket. If the girl’s leg touches the ground, they will have to pause for 10 seconds in the ring. The task duration is for 5 minutes.

All the contestants talk that Piyush has a disadvantage because Arshiya is heavy as compared to Aradhna.

Both the competitors do well but Piyush struggles as he has a discomfort in his shoulders and his chest. Arshiya tells him to quit the task but he stills perform being reluctant.

Next the opponent girls will swing and put the sacks in the opponent boy’s basket. The boys shall hold the basket.

The Chosen Ones have the power to select who will face against each other. They selected to go against Shrey & Priyamvada and they shall perform second.

Loka & Sambhav shall volunteer the couples they wanted to.

Aradhna performs well in the task but Miesha struggles and collect less sacks as compared to Aradhna. Miesha perfectly puts all the sacks in the basket due to which Alfez struggles. Ashish looks firm enough with his grip. Contestants try to cheer up Alfez to cope up.

Finally, Alfez gives up and Ashish & Miesha win the task. They proceed to the Finals.

Bhavya loses her grip early on in the task. Both the girls struggle to gain consciousness. Both the couples were performing equally well. During the second bout, Bhavya’s tornado comes out and she falls down. Sunny looks upon her but she gets up and starts to perform.

Priyamvada starts putting sacks in the basket. Uday struggles a bit. Bhavya misses the shot. Everyone was disappointed. Finally, Uday gives up and Shrey & Priyamvada win the task. Other contestants rejoice as Bhavya lost.