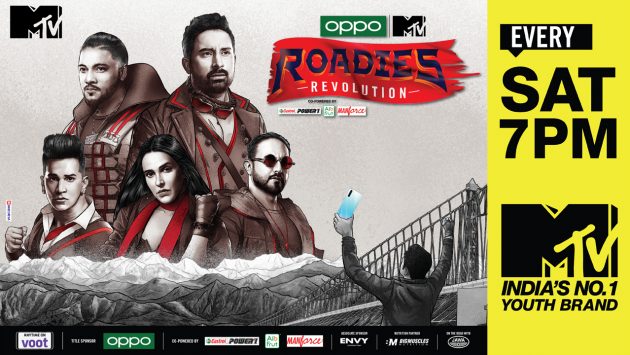 This week of the MTV Roadies Revolution also continues with the Pune auditions. Last week we saw Michael Ajay, Dr. Pratibha Singh, and Malhar Kalambe clear the personal interview round. Let’s have a look at what all this episode has in store for us.


Can Akansha impress the Captains with her acting?

An Aspiring contestant Akansha interacts with Sohail. She is an actor and admittedly a fitness freak. When questioned how she can demonstrate her skills in 10 seconds. She performs a small acting scene. On being asked about the strategy for her interview round. She reveals all she has to do is keep a cool head and understand what is being asked. For the entertaining part, she says all she has to do is be herself. Sohail asks her how much she would rate herself on the darr meter? She says she will rate herself around 5. He then wishes her luck for her interview round.

Yahan pe talent dikhegi ek se badh kar ek!? Kya lagta hai, will she make it to the next round? Tell us what you think in the comments below and find out what happens only on OPPO MTV Roadies Revolution, this Saturday at 7 PM on MTV and anytime on @voot. @oppomobileindia @castrolbiking @axiom_ayurveda @manforceindia #RoadiesRevolution #MTVRoadies

GK round on the Roadies Revolution!

Nikhil questions a duo of contestants, “On the South of India is Sri Lanka. Then what is on the south of Sri Lanka?” One of them answers Water. To this Captain, Price laughs hilariously while Judge Rannvijay looks on with an awestruck expression. While the contestant justifies himself saying there is only water beneath Sri Lanka. When Nikhil further questions if there is anything else?

The other contestant answers Lakshadweep. Hearing this all of them crack up.

How OK is your GK? Will things go south for this entertaining duo? Find out what happens only on OPPO MTV #RoadiesRevolution, this Saturday at 7 PM on MTV and anytime on Voot. @oppomobileindia @castrolbiking @axiom_ayurveda @manforceindia #RoadiesRevolution #MTVRoadies

An aspiring Roadies contestant is seen dragging a guy along using only her legs as leverage.  Rannvijay clocks her all the while encouraging her.

It's all about proving yourself at Roadies.?? Apne favourite leader tak kaun pahunch payega pehle? Find out on OPPO MTV Roadies Revolution, this Saturday at 7 PM on MTV and anytime on @voot. @oppomobileindia @castrolbiking @axiom_ayurveda @manforceindia #RoadiesRevolution #MTVRoadies

Sense of smell tested on Roadies?

A contestant is blindfolded while Nikhil brings a peeled orange for her to smell. She smells and identifies it correctly. Rannvijay meanwhile holds a bowl of onion in front of her. She gets this one right too. Captain Neha then says that the bowl was empty and it was just Rannvijay that she smelt!

An injury during a stunt!

One of the contestant performs some amazing stunts and gets injured while performing. Rannvijay stops the stunt and calls for medical attention. Can this contestant impress the captains with his stunts?

Say hello to motivation for gym day!??‍♂? Kya inki fitness game hai strong enough to impress our leaders? To find out tune in to OPPO MTV Roadies Revolution, this Saturday at 7 PM only on MTV and anytime on @voot. @oppomobileindia @castrolbiking @axiom_ayurveda @manforceindia #RoadiesRevolution #MTVRoadies

Neha dances with a contestant!

Neha is seen shaking a leg with one of the contestants on the song Humma Humma. While the rest of the crew cheer them on!

Ek honge tum aur hum, iss naye safar pe har Saturday!? Witness all the fun from the auditions this year only on OPPO MTV Roadies Revolution, this Saturday at 7 PM only on MTV and anytime on @voot. @oppomobileindia @castrolbiking @axiom_ayurveda @manforceindia #RoadiesRevolution #MTVRoadies