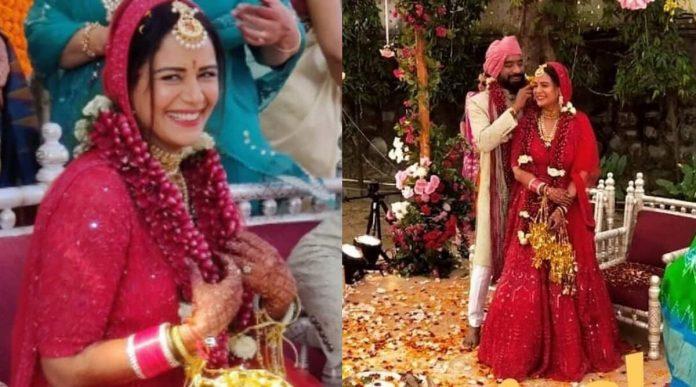 Today TV actress Mona Singh has married her South Indian boyfriend Shyam. Mona Singh, 38, is married in Mumbai. Although Mona has kept her marriage away from the media. But now many pictures of this wedding have come out. In which Mona Singh’s beauty is being seen. On this occasion, Mona was wearing a red color pair. In this marriage of Mona, only her family and very close friends were seen attending. Many celebs like Gaurav Gera, Rakshanda Khan also reached Mona’s wedding. Many pictures of Mona are now going viral on social media. In which she is seen with her husband Shyam.


Let us tell you that pre-wedding of Mona has started from last few days. Before this, pictures of Mona Singh’s mehndi photos also came out. During this, many special friends of Mona’s family remain present. According to the news, during this time, along with Mona, Gaurav Gera, Rajesh Khera and Rakshanda Khan also reached. Many pictures and videos of Mona’s wedding have now surfaced. In which the happiness of his face was being seen.

Actually, Mona Singh’s name has been linked with Karan Oberoi and Vidyut Jamwal. By the way, let us tell you that Mona had gone to Goa for bachelorette with some of her friends only a few days ago. Talking about the work front, Mona was last seen in Ekta Kapoor’s digital platform Alt Balaji’s show MOM. This show has been appreciated by the audience.