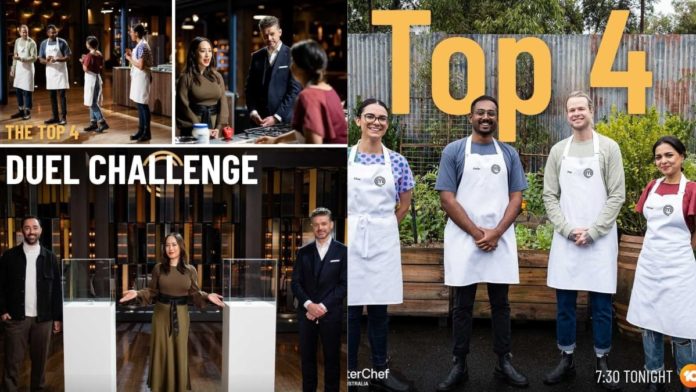 Masterchef Australia Season 13 is all set for an epic showdown in a couple of days. After an intense week of cooking, the top 4 of Masterchef Australia Season 13 are a couple of steps away from taking a shot at Pete for claiming the crown. However, the semi-finals on Sunday will be a shot in the arm for Kishwar, Elise, and Justin to prep themselves for the Grand Finale on Monday and Tuesday.

The last week was shocking and disappointing all at the same time. The audience was used to Sunday eliminations so far in Masterchef Australia Season 13. However, three talented cooks, Tommy, Sabina, and Linda were eliminated one after the other. The pressure took to Linda in the epic dessert challenge while a minor mistake of not roasting macadamias costed Sabina.

The stakes are higher than ever and Pete set the benchmark at an all-new level for the remaining three to win Masterchef Australia Season 13 2021.

The tasks on Sunday’s Semi-finals will feature an intense battle as one of the three contestants will become the second ‘Grand finalist’ of Masterchef Australia 2021.

According to reports, Justin will be the second ‘Grand finalist’ while the audience is rooting for Kishwar. However, the official confirmation will be revealed on Sunday. The three-course meal from Justin, Kishwar, and Elise will be the game changer for their fate.

The odds are in favor of Pete for the position of Masterchef Australia Season 13 winner. However, one small mistake could cost the talented, consistent, and down-to-earth contestant his title.