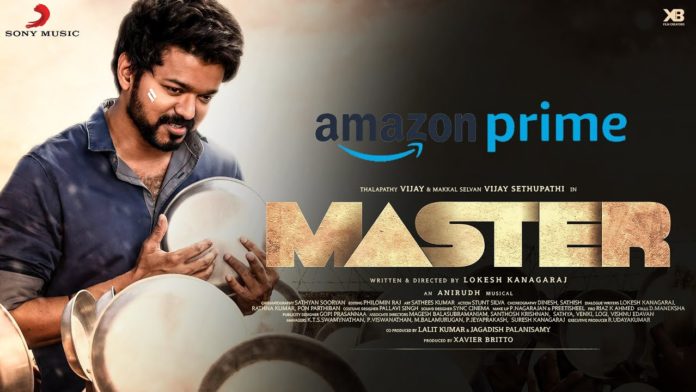 Thalapathy Vijay fans can rejoice as their favorite hero’s movie, ‘Master’ will have a blockbuster opening on Amazon Prime Video soon. After a massive success in the box office, the ‘Master’ movie is pitching for an early OTT release on Amazon Prime Video. Apparently, the occupancy rates dipped post the first two weekends.

‘Master’ movie’s box office collection is pegged at INR 200 crores. However, the movie’s collections declined steadily in spite of no major releases after Pongal. Hence, the makers decided to take the OTT route to keep the buzz alive.

According to reports, Amazon Prime Video signed the deal for Master’s OTT release rights. Also, it is understood that Amazon Prime Video paid the highest ever amount to the production house of ‘Master’ for bagging the rights. However, it is unclear if the makers want to use this opportunity to push for an early release.

Though more information on the deal is awaited, Vijay’s fans can rejoice to watch the movie on the OTT platform from the 28th of January 2020. However, the date is yet to be officially released by Amazon Prime Video. However, major new houses broke the news about the Master OTT release date today.

Although the ‘Master’ movie created ripples across social media for piracy concerns, the OTT release will be a blessing in disguise for the makers. Another factor which attributed to the early release of the ‘Master’ movie on Amazon Prime Video is the lukewarm collections in overseas markets like the USA due to the Covid-19 lockdown.

#Master likely to stream on Amazon Prime on 28th!!