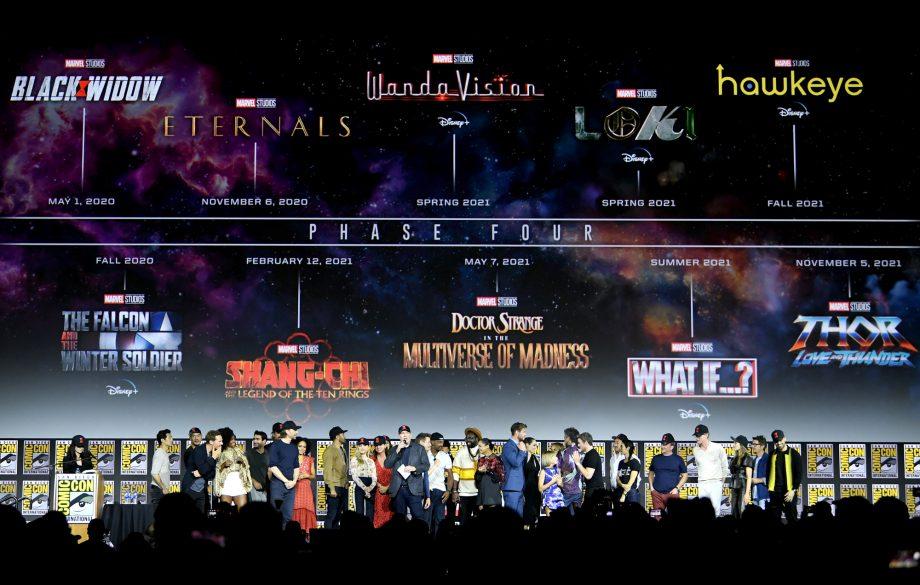 All the Marvel fans went crazy this afternoon as the most awaited phase 4 movies and TV series are revealed. Through posts and stories the names were unveiled. The internet is stormed with fan theories and speculations about the same. All the movies and series are expected to release in 2020 as well as 2021. While some of us are still awestruck to see the new character names and movies for the old heroes, let’s look at each of them one by one.

MCU’s most awaited movie is finally coming to the big screens on the 1st of May, 2020. The movie is going to be directed by Kate Shortland. Scarlett Johansson will take the lead and all mysteries of her past shall be unlocked. The production of the movie was the buzz but now it’s out there before the audience.

If you think Thanos was the last problem to deal with then here is the deal breaker for you. The history of the Mad Titan’s race will be put forward before the audience in this movie. Simply put, Thanos race will be back with bigger and better army. We can expect a lot of action and appearances in the movie.

We all have been waiting to see how the legacy of Captain America will be carried by the Falcon. The series will have the adventures of both the superstars past the Civil War. The lead for both of the characters are the same, Anthony Mackie and Sebastian Stan.

A new character is on its way to come forth on February 12th, 2021. MCU will be having its first movie with an Asian star in the lead role. A lot of action is about to unbox with the character of Shang-Chi coming into play.

The first spooky- scary movie from the MCU is going to be the next part of Doctor Strange. Since we know that it’s going to be multiverse in the first place, we can expect a few appearances of other characters from MCU as well. In fact, Wanda Maximoff will be playing a big role in the movie. We all can’t wait to see the perfectionist and talented Benedict Cumberbatch coming back into action this time.

MCU is amazing when it comes to tracing storylines. Here’s a movie for the villain who was loved in the Avengers series. Loki is going to be a movie that throws light on the past of God of Mischief.

The first animated movie is going to come in the summer of 2021 from the MCU. As Kevin Feige has revealed, we can expect a lot of characters appearing in this series. The series will explore the alternatives of some of the past events in the MCU.

In the Endgame we have seen Hawkeye has been training her daughter for the big game and here it is. In this series Hawkeye will be seen teaching and training Kate Bishop as her successor.

Endgame left all Thor fans on a very sceptical note but don’t worry we have got you covered as well. This is one of the biggest reveals from MCU so far. We are going to meet the female Thor who is going to be none other than Jane Foster (Natalie Portman). Stay tuned for November 5, 2021.

Another new character MCU is going to offer is one in the movie Blade. Not much is revealed about the movie so far. The lead role is taken by Mahershah Ali.