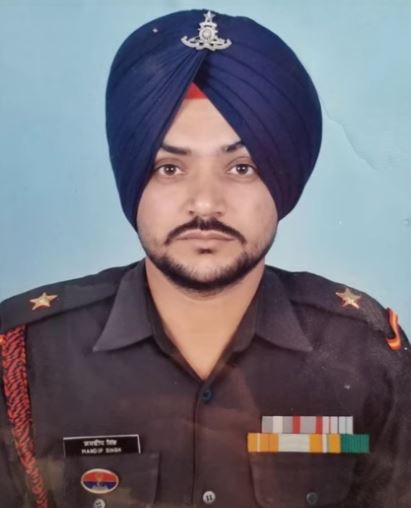 The Indian Army released the names of 20 soldiers who were killed in action on Monday at the Galwan Valley, Ladakh, after clashing with China’s People’s Liberation Army (PLA). Slain Soldier Nb Sub Mandeep Singh is hailing from Patiala, Punjab. Nb Sub Mandeep Singh was killed after being exposed to sub-zero temperatures in the high altitude terrain. The Supreme Sacrifice of Nb Sub (Dvr) Mandeep Singh from patiala punjab ,3 Medium regiment,during a violent face-off with Chinese PLA GF at GalwanValley, Ladakh, 15 June 2020.

Naib Subedar Mandeep Singh who was killed on the LAC in the Galwan Valley clash in Ladakh was the sole breadwinner of his family comprising of his mother, wife and two children. The family, including his mother Shakuntla, wife Gurdeep Kaur, and two children Mehakpreet (17) and Jobanpreet (12) and an aunt, were inconsolable hearing the news of his demise.