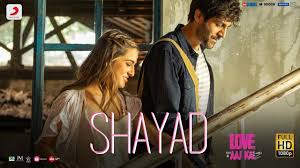 Love Aaj Kal directed by Imtiaz Ali starring Kartik Aaryan and Sara Ali Khan in the lead roles is a story revolving around two couples across two times. One couple was based in Udaipur in 1990 and the other is a modern day Delhi based couple. As the narrative progresses they understand the facets of love and commitment that come along with a relationship.

The soundtrack of the film is by composer Pritam and lyricist Irshad Kamil. They reunite with Imtiaz Ali for the film. The theme of love is apt not only for the narrative but also the day it is being released, Valentine’s Day. The album is a celebration of love through its various forms, its array of expressions both then and now.

The first of the album, Shayad, was released today. Sung by Arijit Sing it hits the right cords. The song is a beautiful amalgamation of the innocence and tenderness of a first love. These emotions hit close to the other irrespective which generation you are from. It goes past differences of expression and communication gaps.

On one side we see the tender high school love story of Raghu ( Kartik Aaryan) and Leena ( debuntate Arushi Sharma). High school sweethearts of the 90’s who explore the diversifications of love through movie outings and school dances. The flip side of the coin has the breezy and understated chemistry between Veer ( Kartik Aaryan) and Zoe (Sara Ali Khan). They are the millennial couple of Delhi.

The song demonstrates the innocence of first love where so much is left unspoken. It showcases how love is timeless and continues to remain precious and full of meaning. Shayad transports you relive your memories with your first love. This beautiful melody describes the fresh excitement that sets in and the hesitation that comes along with it.