Kings XI Punjab started off with an emphatic win over RR which was marred by Ashwin’s ‘mankading’ controversy. Their second game saw a glaring error by captain Ashwin in his field placement which resulted in a no-ball, granting the in form Andre Russell an important lifeline. KKR took away the game from Punjab riding on Russell’s shoulders. KXIP came into the last game with a flurry of changes in their batting and bowling options. David Miller and Mayank Agarwal looked promising while the much spoken about spinner Varun Chakravarthy went for a lot of runs.

A lot is riding on the star openers Chris Gayle and KL Rahul as Kings XI Punjab look to reverse their fortunes at home.

Determined Mumbai Indians look to ride on their RCB win

Mumbai Indians are undoubtedly the poorest starters when compared to how they finish off the tournament. The three time IPL champions will be looking forward to exercising more discipline in the bowling department inspite of the successful defence against RCB in their last game. Malinga’s inclusion was a blessing in disguise while Markande looked promising too. Bumrah is being used predominantly in the death overs which is a huge boon for MI.

Skipper Rohit Sharma is opening the batting for MI and he produced a cracking 48 in the last game. Suryakumar Yadav needs to adapt to the upper middle order slot after fairing significantly well in the last season. Quinton De Kock and the Pandya brothers got off to starts which wasn’t enough to chase down a mammoth target in the first game. Hardik Pandya’s quickfire 32* off just 14 balls helped Mumbai reach a respectable total to defend against RCB.

The last ball bowled by Malinga with 7 runs to defend of 1 ball was a no-ball which went on undetected by the umpires. While the errors lie with the umpires, Mumbai Indians have been heavily trolled for the result which went in their favor.

Mohali has produced some of the highest scoring league games in the history of IPL. 180+ scores have been chased with ease in this batsman’s paradise while the seamers have got assistance every now and then. Statistics suggest that the teams bowling first have got a better chance of winning the game.

Odds are in favour of MI and/or the team batting second as chasing has worked well in Chinnaswamy. KXIP clearly do not have the significant home team advantage in Mohali. 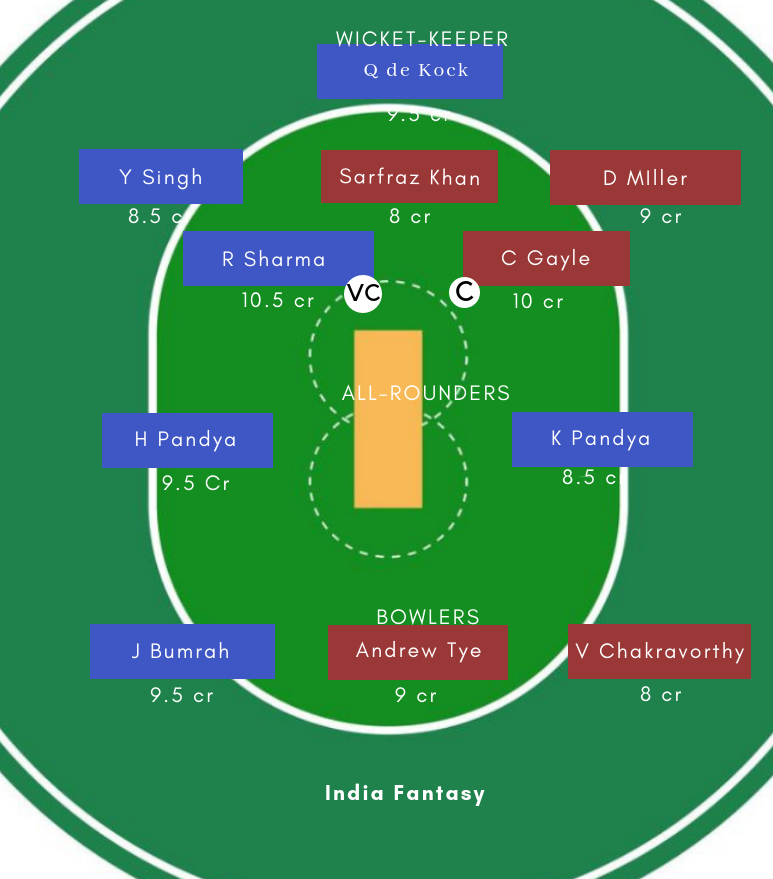 VISIT US AFTER THE TOSS FOR THE FINAL STRATEGY!