Previous episode of Kundali Bhagya saw that both Preeta and Karan are made for each other. She decides to convince Mahira, not to marry Karan. Mahira gets angry and tells Preeta that she has made a joke of herself. Karan wants Preeta near him and look after what all he wants.

Sherlyn mocks Srishti, but Srishti threatens to expose her and makes her quiet. Prithvi enters the hall and first meets Risabh.

In tonight’s episode, Risabh wants to know what Prithvi is doing in the hall at Luthra’s party. Prithvi responds by saying that he is here to help Preeta. Risabh is called by Sherlyn to accompany her, but Prithvi avoids her by not showing his face. He somehow bumps into Sherlyn but again he avoids her by hugging a stranger. The Stranger informs him that its Karan and Mahira’s Mehndi Ceremony.

On the other hand, Mahira is still thinking about what Preeta told her, while others apply Mehndi on her hands. Daadi says that the darker the Mehndi will be, her to be husband shall love her more. Kareena asks Srishti to take Mahira into the room and wash her Mehndi. Sherlyn also accompanies them. Kareena says this shall teach Srishti a lesson.

Preeta walks out of the hall as Karan follows her. Preeta tells Karan that she tried a lot of times to tell him how much she loved him. Karan also confesses that he loves Preeta but it was Preeta who never understood it. Preeta agrees to be with Karan throughout during the ceremonies and takes him inside the hall.

Srishti helps Mahira remove the Mehndi from her hands by applying oil. Mahira tells Sherlyn how Preeta asked her to back out of the wedding. Sherlyn taunts Srishti, but Srishti cuts her off by threatening her to talk about the pregnancy. Raakhi and Daadi walk into the room as Sherlyn leaves. Prithvi is looking out for Srishti, when Ramona tells him to meet Sherlyn.

The upcoming twist would be that there will be a new entry in the show who shall help Preeta in her problems. Who will be the person? Stay Tuned. 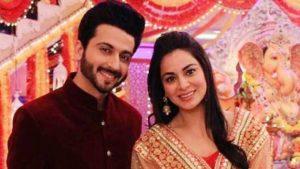