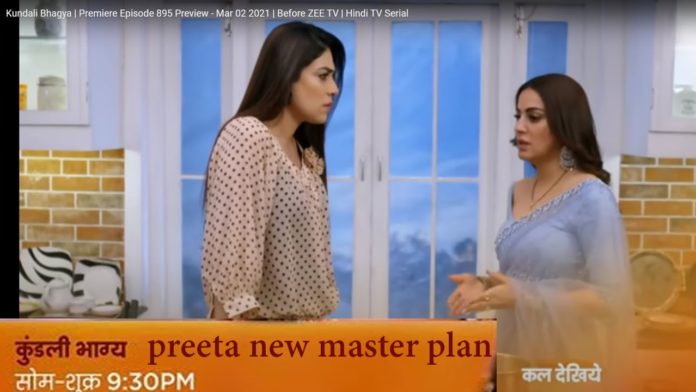 A new twist is coming in Kundali Bhagya. Prithvi Luthra House has arrived. Kareena Bua has given the responsibility of wedding function to Preeta. Prithvi has told Sherlyn that he has come to ruin everyone, and he only loves her.

Kundali Bhagya 2nd March 2021 episode will show that Prithvi is quite happy to see Srishti in Luthra House. He says that Kritika and Srishti are like sisters, then Srishti became her sister-in-law with this relationship. Mahira makes a new plan to go to Karan. She says that now she will win Karan’s trust. She tells Karan that Prithvi has come home with his mother.

Karan’s mood worsens after hearing Mahira’s words. Here Srishti asks Preeta to explain to Kritika. Preeta tells him that Kritika does not believe anything about him. Srishti says that she saw Prithvi and Sherlyn hiding outside. This means that those people must be making a big plan.

Srishti says that she will not allow this marriage to take place at any cost. Kareena tells both of them that if there is any disturbance in the marriage, she will not leave them. Prithvi goes to Mahesh Luthra and says that he should put all the property paper in his name because now he has also become half Luthra.

In the last episode, you saw that Kareena tells Bua Preeta that there should be no wrong in the responsibility given to her by her son-in-law Prithvi for her wedding function. At the same time, Prithvi explains to Sherlyn that he has come to ruin Luthra House. Sherlyn says what the need to get married was. On this, he says, trust me because I only love you.