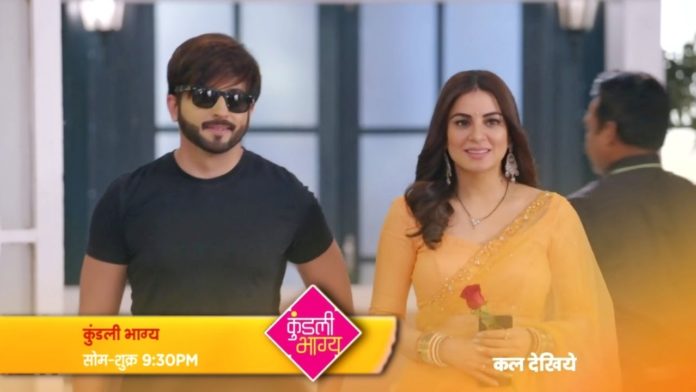 High voltage drama is being seen in the serial Kundali Bhagya. Preeta’s mother, Sarla, has taken him back from Luthra House in anger. Karan and Preeta are missing each other. Karan reaches her house secretly at midnight to meet Preeta; Sarla feels that a thief has entered the house. Everyone starts searching for the thief. Sarla comes to know that Karan has come to her house.

You saw that Sarla requests Karan to leave the house. Karan requests Sarla to allow Preeta to go to Luthra House with him. Karan promises Sarla that he will always stand with Preeta as she trusts him. Karan asks Sarla permission for Preeta to go with him.

In the Kundali Bhagya episodes aired on 17th February 2021, you will see, Sarla gets emotional and tells her that he should stay home overnight or come home to pick her up the next morning. Karan pretends to go home but reaches Preeta’s room again. Preeta applies turmeric paste on her wounds and comes close to her. Later, Karan kisses Preeta on her forehead and calls her Happy Valentine’s Day. Preeta blinks and turns her eyes.

Now it will be interesting to see if Sarala will listen to Karan? Will Preeta be able to return to Luthra House? Will his truth be revealed to everyone? This will be known only in the coming episodes. You saw that Sarala is shocked to see Karan at her house. Preeta tells her, whatever you want to say, now tell in front of mother. Sarla says that Preeta has a smile on her face. Karan promises Sarla that he will not be in that house again with Preeta.

In the last episode, you saw that Mahir is happy to see Karan alone and says that he will make some special plans for Valentine’s. Here, when Preeta sleeps in the night, Karan comes to meet her silently. Preeta first starts killing her as a thief. Then when she learns that she is Karan, she hugs him.