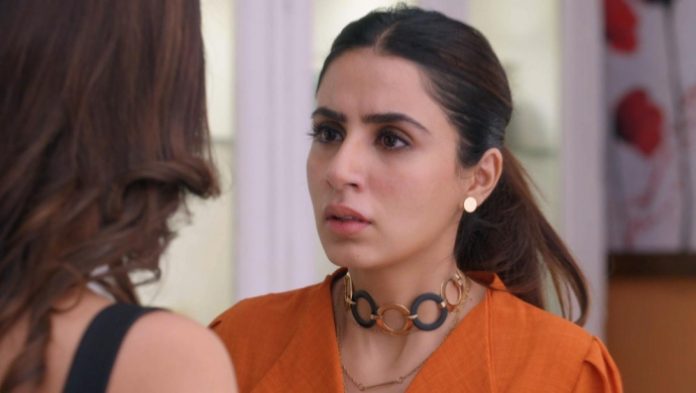 In the last episode we saw a tussle between Rakhi and Sherlin. Rakhi doesn’t like the way Sherlin disrespects Preeta. This makes Sherlin angry and she decides to take revenge on Rakhi. She calls Prithvi, who is in total support of her. Sherlin hatches a plan where in she spills oil on the stairs for Rakhi to fall down but the ultimate victim is Daadi.


In Today’s episode, Daadi goes near the stairs and slips over the oil. Everyone is shocked and panic and tries to save her but she falls down of the stairs and hurts herself. Karan and Rishabh go downstairs. Rishabh picks her up and takes her to the room. He asks Sherlin to bring a hot water bag. Mahira doesn’t believe that Sherlin could stoop to this level. She checks for the oil on the stairs and finds the bottle. With all this, her doubt becomes strong on Sherlin.

Sherlin comes to her room and is in disgust. She wanted to take revenge on Rakhi and Daadi became a victim of it. She thinks of how she can take revenge on Rakhi. Mahira comes to her and claims to know that she has done all this. Sherlin explains as to why she did all this. Maira tells her that she is going to tell everyone about this. Sherlin being clever, tries to convince Maira that she will see as to how Preeta doesn’t become a part of the Luthra family. Maira doesn’t want to get convinced and is adamant on what she wants to do.

Rishabh lays down Daadi on the bed. He tries to call the doctor but he isn’t available. He tells Karan to call Preeta to take care of Daadi. Karina doesn’t seem optimistic about calling Preeta to take care of Daadi. Karan knows that she will come once she gets to know that Daadi isn’t feeling well. Karan calls her and explains her everything. Sarla over there asks who she is talking to, she mentions that it is Karan. She tells Sarla that she has to go to Luthra’s as Daadi is not feeling well. Sarla clearly refuses her to go and take care of that family.

Sameer is seen waiting for Srishti to come. She arrives and calls Sameer a coward. Sameer defends himself and tell that we shall go in the nearby market to have an ice-cream. Srishti is excited about this plan and exclaims that they both don’t have to sit in some closed room. Srishti discusses about Karan and Preeta with Sameer, that they have started liking each other once again and seem to be very happy.

Everyone takes care of Daadi. Maira tells them that she knows a Doctor who shall take care of Daadi. Karan says he only trusts Preeta in this matter. Maira gets offended but Rakhi explains to her that her sons won’t listen to anyone with regards to Daadi.

Sarla asks Preeta why does she want to help that family. Sarla cleverly says that that family has harmed her in all possible ways and still Preeta wants to help them. She doesn’t care about her feelings that is the reason she is doing all this. Due to this, she won’t allow Preeta to go to Luthra’s house.

The show comes to an end where Preeta explains that she being a Doctor took an oath as to help all the patients. Sarla makes her a promise, wants her to come back as soon as possible and go over there only as a doctor. Preeta asks her about being Preeta over there but Sarla remains silent on that.