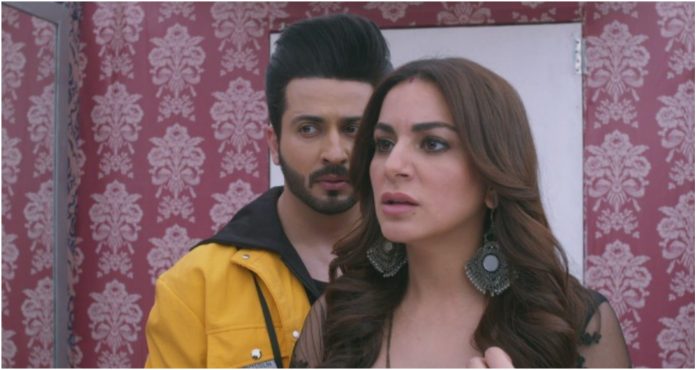 In the last episode, we saw the robbers get caught and the hall is saved. Rakhi wants to give Preeta her status in the family back. Maira isn’t comfortable about this and she wants Ramona to talk about it. Karan and Preeta can’t stop blushing as they both are in love with each other.


The show starts as Karina arrives with Sherlin to greet Dadi and Kartika. She asks about Rakhi. Rakhi arrives with the breakfast. Karina is glad to see how Rakhi takes care of everything and claims her to be lucky. Dadi explains that she is happy to see all of them so happy. Rakhi tells Maira to take a seat as henceforth she has to look into these matters once she gets married. Ramona is happy that Rakhi cares for her daughter. Ramona mentions about movie references in general that they give more importance on daughters, so in that way she has left no stone unturned in the upbringing of Maira. She wants that Rakhi and her family should take care of her in the same way. Rakhi assures her that they shall take care of her.

Rishabh and Karan arrive at the table. Maira serves Karan, but he asks about Ganesh. Rakhi advises Dadi to have some dryfruits as Preeta told her that they shall be good for her health. As Rakhi mentions Preeta’s name, everyone gets annoyed. She mentions that she deserves some respect atleast from Sherlin’s behalf. Karina leaves the table on hearing this. Dadi admits the fact that Preeta saved their lives but it would be okay if they don’t mention about her.

Ramona states that it might be their plan to hire robbers and trouble them. This makes Karan angry and he says that they won’t do all this as they are good and honest people. Ramona is stunned on hearing this and she questions Karan on his statement even after what they had done to the Luthra’s. Karan defends them that Preeta saved Rakhi and she means a lot to him. Maira asks about her position in his life. Sherlin takes Maira’s side which makes Rakhi angry and she scold her. Karan takes Rakhi’s side and says that whatever Sherlin says is sometimes frustrating. Sherlin questions Rakhi as to why did she take Preeta’s side. Rakhi explains that she shall take her side as she is like her daughter. She loves their family and shall stand up with them whenever needed. She also mentions that Sherlin should realize this fact. She then asks Rishabh and Karan to accompany her.

Sherlin enters her room and makes a mess of it in frustration. She thinks how could Rakhi do all this to her. She is bearing all this only because of Prithvi, but he doesn’t have the courtesy to even call her. She calls Prithvi. He is in doubt why is Sherlin calling him. He answers the phone and tells her that he was thinking about her only. She replies that he doesn’t care about her anymore as she had seen him with Preeta and not to lie about it to her. Prithvi replies that he is about to take revenge on those people who have harmed her. She mentions that Rakhi insulted her in front of everyone when she said something about Preeta. Prithvi tells her if he shall kill her and whoever does wrong to them shall have to pay. Sherlin starts to cry and Prithvi asks her why is she crying. She says she has never heard Prithvi talks so nicely with her. Sherlin devices a plan wherein she shall be good in front of Rakhi and create a positive image in front of her.

Rakhi brings both of them in the bedroom. She is about to scold both of them as she didn’t like way, they talked to Sherlin. She says they both are young and shouldn’t talk in between when elders are speaking. Three different people have three different opinions but that doesn’t mean they should interfere. She asks Rishabh to make it understand it to Karan after which they hug.

As Sherlin is walking, she sees the three of them hugging each other. She thinks that whatever Rakhi did was wrong and shouldn’t have done that, she shall pay for it. Sherlin pours oil on the stairs. She wants to see the whole drama. Maira sees her doing all this and thinks what is going on in Sherlin’s mind. Rakhi apologizes to Sherlin for her behavior and Sherlin also apologizes to her. Karan and Rishabh are following her, when she is about to keep feet on the stairs, they both call her. Rishabh explains that he has invited Karan to be the Chief Guest, so she should advise him what to wear. She tells him that he shall look handsome in whatever he wears. Dadi is accompanied by Karina. They also apologize to Rakhi. Dadi gets a call and she walk towards the stairs. Sherlin wonder that if she calls her, everyone will get to know that she has done all this, so she stays quiet. The show ends as Dadi falls down from the stairs.

Bigg Boss 4 Telugu Week 4 Voting Results: Who is in Danger of Elimination This Week?