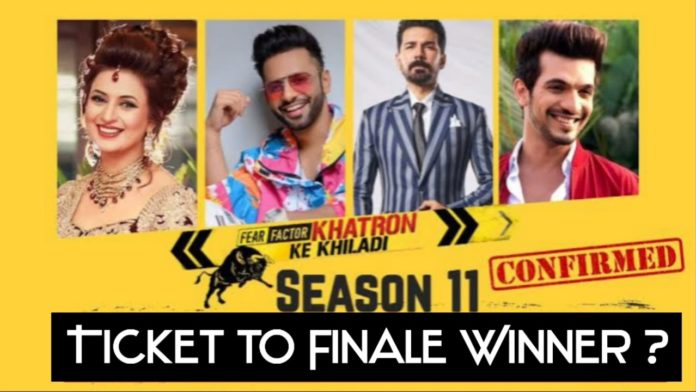 Khatron Ke Khiladi 11 is back this weekend with a decisive week filled with the toughest stunts for the ‘Ticket to finale’ race. The elimination fight heats up in Khatron Ke Khiladi 11 as the contestants grapple to become the first finalist of KKK11 during the 5th of September 2021 episode.

The stunts this week will decide the ticket to finale winner of Khatron Ke Khiladi 11. Anushka was the last contestant to be eliminated. Though it was a disappointing elimination last week, the top six contestants will get a shot at redeeming their KKK11 journey.

The first stunt for the Ticket to Finale winner started off with an exhilarating stunt. The stunt was a one-on-one stunt with Vishal and Rahul at loggerheads. Sana and Divyanka competed in the other leg. The human slingshot task tested the wits of the four contestants. However, Vishal and Divyanka are the winners of the competitive clash.

The second stunt was performed by the four strongest contestants. Abhinav, Arjun, Shweta, and Varun competed in an underwater stunt that tested the nerves of the contestants. The first contestant to get the flags and unlock are the winners. Varun and Abhinav had a bad outing this time around and aborted the stunt. However, Abhinav won the second round while Arjun defeated Shweta.

The third stunt will feature a duel between Rahul/Varun and Shweta/Sana. The task involves getting flags in a cage filled with crocodiles. Shweta gets the advantage of a minute extra after eating more chilies. However, the task was closely fought. Shweta/Sana was defeated by a mere 8 seconds. Hence, Rahul and Varun entered the ticket to finale race on Sunday.

The ticket to finale winner stunt will feature the following contestants:

At the end of the elimination task last week, Anushka lost the task. As a result, Anushka got eliminated from KKK11.

Vishal Aditya Singh or Divyanka will be the ticket to finale winners of Khatron Ke Khiladi.

Five eliminations took place in Khatron Ke Khiladi 11 so far. However, three of them return as wildcard entries last week. As a result, this week’s ticket to finale stunt will be crucial for the five contestants with Fear Fanda. Out of the contestants in the danger zone, Shweta, and Sana are the stronger contestants. There is a high probability of Anushka’s elimination.

Three eliminated contestants will return back to Khatron Ke Khiladi. However, Nikki and Mahek are eliminated.